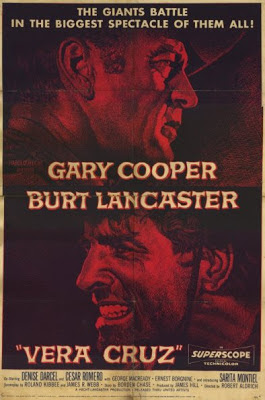 Robert Aldrich’s Vera Cruz was one of the earliest films in the transition of classical Westerns to their revisionist counterparts. Its cynical tone, penchant for violence and glibly amoral protagonists who prefer money over cause, were however masked by the action and spectacle that typified it. Consequently, even though, on hindsight, it feels slight and merely entertaining vis-à-vis other revisionist Westerns, its importance in the genre’s evolution ought to be acknowledged. The story is set in 1866 during the Mexican Revolution when Americans by the handful ventured into the country in the hope for lucrative opportunities that situations of turmoil generally provide to mercenaries and outlaws. Ben (Gary Cooper), a former Confederate soldier, and Joe (Burt Lancastar), a crooked gunslinger, take up the job of protecting Countess Duvarre (Denise Darcel) during her transportation to Veracruz, at the behest of the country’s emperor in exchange for a lucrative fee, and much to the chagrin of the rebels. However, as they soon find out, their real job is to protect the millions worth gold that is secretly accompanying her, and hence stealing that, with the help of the duplicitous lady, becomes their objective, while staying a couple of steps ahead of everyone, including each other. The divergent personalities of the two principal protagonists – one serious, sober and wary, the other nasty, unreliable and perennially grinning – made for an interesting psychological duel, but didn’t alleviate the film beyond its scintillating sequences and gunsmanship. Further, Cooper looked quite out of sorts given the film’s tone and style, and particularly in comparison to Lancaster’s delectably over-the-top turn.

I Thought the set up in the first half was ok, but that was let down in the predictable 2nd half.

burt lancaster was ok, but kevin cooper, as you rightly pointed out, was mis cast in this role.

I guess you meant Gary Cooper. Yes, he was miscast - didn't fully fit into the scheme of things methinks. And since Lancaster clearly had the author-driven role, Cooper seemed even more out of place.

Aldrich is one of my favorite directors, and I like this movie quite a bit, but I think I prefer his other two westerns with Lancaster - Apache (1954), which has incredibly bold style and one of Lancaster's most physical performances, and the supreme masterpiece Ulzana's Raid, which has my single favorite Lancaster role in addition to one of the most morally and emotionally complex screenplays ever written, and is really one of the only 70s westerns I care a great deal about.

I think Vera was meant to be seen as a bridge between generations, though it does wind up playing more as "out with old/in with the new" and Lancaster's wide grin winds up the dominating presence. It's very fun and incredibly well made of course, but I agree there is a slight quality to it.

Thanks Drew for sharing your insights on & appreciation of Aldrich & Vera Cruz. This and Kiss Me Deadly are the only 2 Aldrich films that I've seen so far. But, given your strong recommendations, I'd ideally watch both Apache & Ulzana's Raid, and at least the latter, as I particularly like morally challenging revisionist Westerns.

Yes, there's no doubting the fact that Vera Cruz was a fun, fast-paced & enjoyable watch. But it wasn't really much more than that in my opinion as, for all its style, Aldrich seemed more interested in telling an engaging story rather than delving deep into the characters' psyches or such. And Lancaster sure dominated the proceedings, making Cooper seem all the more out of place.

"The divergent personalities of the two principal protagonists – one serious, sober and wary, the other nasty, unreliable and perennially grinning – made for an interesting psychological duel, but didn’t alleviate the film beyond its scintillating sequences and gunsmanship."

Yep I couldn't agree with you more! We are completely on the same page with this one. No disgrace by any means, but not as good as some might believe. Terrific review as always!

I agree with Drew on ULZANA'S raid, which was given a very nice write-up recently by Samuel Wilson at MONDO 70.

Thanks Sam. As far as Ulzana's Raid goes, I sure am more than keen in following Drew's and your advices, and give it a try sooner rather than later.