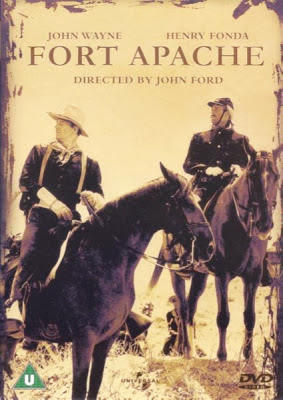 Fort Apache was the first chapter in John Ford’s renowned ‘Cavalry Trilogy’, the ambitious saga based on James Warner Bellah’s stories that chronicled the armed territorial struggles between the US Cavalry and Native Indians from the former’s point of view. Arguably the best of the lot, it depicted a devastating self-destructive battle led by a stubborn and blinded commander of a post, only for him to be, ironically, labeled as a great hero by the media upon his death courtesy an honorable lie. In that respect one might draw parallels with Ford’s marvelous myth-breaking The Man Who Shot Liberty Valence. Lieutenant Colonel Owen Thursday (Henry Fonda), a decorated and vainglorious veteran of the Civil War, is assigned, much to his disdain, the command of the far-flung outpost of Fort Apache. The men, both commissioned and otherwise, had expected the practical and respected Captain Kirby York (John Wayne) to be given the job, but acquiesce to Thursday’s stern presence. The opportunity for a much needed peace with the Indians arrives on account of Kirby’s intervention; however, Thursday’s quench for war takes precedence over Kirby’s moral stand as well as his tactical advices. Consequently when the inevitable battle occurs, Thursday and his men become sitting ducks to their shrewd opposition leading to a complete massacre. Meanwhile, the blossoming love affair between Thursday’s lovely daughter (Shirley Temple) and a young West Point graduate (John Agar) formed a key sub-plot. The sympathetic and impartial portrayal of the natives counterpointed by Fonda’s unsympathetic turn, the theme of pig-headed and foolish heroism, depiction of camaraderie, excellent cinematography, and fine soundtrack made this a highly engaging watch.

Yes, rather persuasive parallels there with THE MAN WHO SHOT LIBERTY VALENCE, Shubhajit. And I quite agree it's an engaging watch, what with the brisk action set pieces, the excellent cinematography and the memorable score. Henry Fonda is quite good here.

Yeah, the parallels between the two were quite interesting to observe though they were quite different otherwise. Though most would disagree with me, this ranks as the best of the trilogy in my opinion.

Fort Apache is frustrating to watch. The film keeps bouncing around from comedy to romance to action film. Too much time is spent on slapstick scenes involving the new recruits. Stick with Henry Fonda's character. What happened between him and Capt. Collingwood in the past? We never find out.

Well, this wasn't a flawless film for sure, but I certainly didn't dislike the film like you did. I found its basic theme quite intact and well captured.