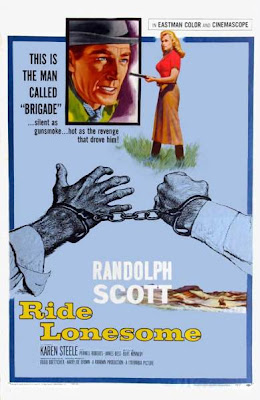 Ride Lonesome, the penultimate film of the so-called ‘Ranown Cycle’, viz. the seven film collaboration between director Budd Boetticher, actor Randolph Scott, producer Harry Joe Brown, and scriptwriter Burt Kennedy, remains the most highly reckoned work of the filmmaker. It was about, as the title clearly suggests, a taciturn loner, gunslinger and bounty-hunter driven by vengeance. The man in question is Ben (Scott), and the film begins with him capturing, courtesy a straight-faced bluff, a young guy (James Best) wanted for murder. Two outlaws who are interested in the share of the loot, and a newly widowed knock-out (Karen Steele) who catches attention wherever she goes, join him in the arduous task of crossing Indian territory in order to, seemingly, deliver the psychotic killer to the state. But, as is gradually revealed, his sole motive here is to use the guy as a bait for luring his notorious elder brother (Lee Van Cleef) in order to settle an old score. The film was replete with exciting action sequences, and that, combined with the fine build-up, the perpetual sense of suspense and tension, the nicely photographed landscapes, the moody and ambiguous atmosphere, and its obsessed-with-revenge anti-hero, made this muscular B-Western an engaging watch. But, that said, I wouldn’t call this a masterpiece as most admirers of this film tend to do. The supporting characters, particularly the lady who seemed to have certain agendas of her own for most parts, weren’t particularly well explored. And the ending, despite the inevitable face-off, could have done with a darker climax; the simmering violence of the storyline never really managed to explode, though the "hang tree" did make for a distressing symbol.

I agree that this is the most overrated of the Ranowns, though all of them are fine westerns. Maybe people really dig that tree.

If I may correct you, Lee Van Cleef had been working in movies for nearly a decade by this time. You can see him prominently during the credits of High Noon, for instance. However, Ride Lonesome is the movie debut of James Coburn, and that does count for something.

Ah, my mistake. Thanks for pointing that out. And yes, though I did like the movie, I feel its tad overrated. But, that said, I certainly liked it far more than the other Ranown that I've watched, viz. Decision at Sundown.

This one is solid, but not my favorite either of the Boettichers. For my money, The Tall T and Seven Men From Now are truly great.....Comanche Station is pretty damn good too. After that I would rank Ride Lonesome number 4.

Thanks Jon for sharing your favourite Boettichers. From the vibes I'd got from the net & other cinephiles, Ride Lonesome is perhaps his most famous work. But your summation of the 3, and Tall T & Seven Men from Now in particularly, has particularly sparked my interest.

This is one of my favorite movies, and my favorite of the cycle along with The Tall T. I do love the ending and the way the tensions are subsumed into that cathartic final shot, but I also think that Boetticher's general handling of the desert space here is never less than brilliant. That one shot with the Indians charging over the horizon behind Scott and Roberts is as thrilling as it gets.

The pre-Ranown westerns Boetticher did for Universal-International, while not quite as accomplished, are worth seeking out also. In particular I'm fond of Seminole, a very mature, ambitious, mood drenched pro-Indian western with great location photography and a good Rock Hudson performance.

I do appreciate your fondness for the film, and from what I understand you're in strong company on that front. Though I didn't dislike the ending, I felt it could have done with a more disconcerting one - especially with the 'hang tree' providing such a powerful commentary on the vicious cycle of violence. The Tall T, from what I'm realizing, is one Boetticher that I ought to watch sooner rather than later.