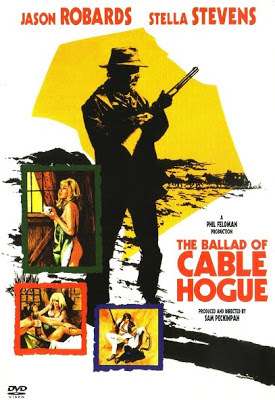 Sam Peckinpah’s The Ballad of Cable Hogue was made between two of his most violent and nihilistic films – the revisionist Western masterpiece The Wild Bunch and the highly disturbing Straw Dogs. Yet, interestingly, this light-hearted, gently moving, humorous and satirical dramedy couldn’t be more antithetical to the two sandwiching it. The picaresque storyline follows the fascinating life of its cranky, roguish and enterprising protagonist Cable Hogue (Jason Robards Jr.). Robbed and left to die in the middle of the Arizona desert, Cable, after walking for days without food and water stumbles upon a water source in the middle of nowhere. Realizing the value of this serendipitous discovery once he has quenched his thirst, he goes about building a place for stagecoaches and travelers to stop. While in this entrepreneurial endeavour, he makes the acquaintance of the delectably vulgar and libidinous Rev.  Joshua Sloane (David Warner), and falls for Hildy (Stella Stevens), the pretty hooker he “befriends” with the first money he has earned. The love story between these two outsiders provided an affecting emotional core to this darkly comic film. Revenge formed a running theme as, despite his growing prosperity and the passing years, his desire for getting even with the two men who had robbed him many years back is never diminished. Meanwhile, the advancement of civilization, depicted by replacement of horses with automobiles, added another key subtext, and provided for a memorably ironic finale. Both Robards and Warner were excellent in their deadpan portrayals, while the lilting folk-ballads and leisurely pacing provided the right quantum of mellowness to the amusing plot developments and natural crudeness of the characters.

This is actually a pretty dark movie. Hogue hangs around that spot and even gives up on love to get his vengeance.

Yes, vengeance did form a key driving force for Cable, though, ironically, had he not been robbed & left stranded by those 2 men, he'd neither have found the water nor his love. But, in comparison to the film that preceded & followed it, it was quite a gentle film really.

Till The automobile entry, the film was moving smoothly with the flow of a nice western.

suddenly after the automobile enters the scene, you tend to feel that the film takes a u turn in it's flow.

you feel that the film ends from the moment the car enters the film and u are watching another film and not the ballad of CH.

Well, the entry of the automobiles did change the film's focus. But then, Peckinpah had always been fascinated by the theme of Death of the Wild West, and the fact that not just figuratively, but even literally Cable is killed by the marching civilizations, added layers to the film in my opinion.

Agreed Shubhajit, that this is definitely antithetical to the Peckinpah films that come before and after it. Never a personal favorite I still think it's a reasonably impressive work that effectively integrates humor into the proceedings. I haven't seen it in years and would like to do so again soon.

Thanks a lot Sam. I too was taken aback by the film's warm, light-hearted and gently amusing tone, given that THE Sam Peckinpah made it. The fact that 2 of his most violent & nihilistic films sandwiched it, made it all the more interesting. Personally I quite liked the film, and feel that its deeply underrated & under-watched. I'd be really interested to know your opinions as & when you manage to revisit it.