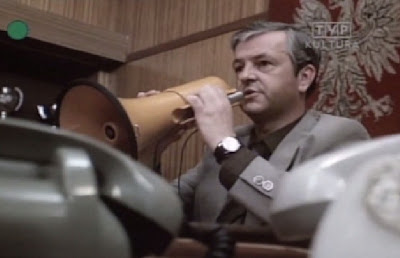 Unlike most of his later works for which he is mostly renowned for, films belonging to the first half of Polish Master Krzysztof Kieslowski’s career as a feature film director were deeply political in nature – and this oftentimes resulted in them earning displeasure and even wrath of the country’s then censor board. Short Working Day, which Kieslowski made for TV in the same year as his masterful Blind Chance, faced a fate similar to the latter film; in fact, its official television premier happened a good 15 years later! This fictionalized account of real events chronicled the massive worker protests in 1976 through the eyes of a newly promoted Party honcho. Narrated in flashbacks, we first see the rise through the ranks of the seemingly apolitical and decent-natured protagonist to the position of Party Secretary of the city, and then the fateful “short working day” is chronicled where he, hitherto unaccustomed to such occurrences, must deal with the massive gathering of highly agitated blue-collar citizens through a combination of tact and patience. Though he does resort to providing assurances to pacify the crowd by thinking on his feet – assurances which he too knows in his heart are futile at best, and though the director’s underlying sympathy is with the proletariat, he is never shown as an opportunist or a heavy-handed person. Instead he has been portrayed as a sympathetic person caught unawares between the masses and his cynical bosses. Though an overtly political film with moments of wry satire (most notably in the flash-forward scenes), it also managed to be an engaging character study.

Alas Shubhajit, I have not yet seen what you refer to here as an 'engaging character study' but I have seen the excellent BLIND CHANCE, which you rightly note was released the same year. Kieslowski is one of the greats, and what you describe of the subject, the flashbacks and the moments of wry satire, make this one to catch up with much sooner than later.

This remains a sadly underwatched film - maybe because it was made for TV, and has come to be known as a lesser Kieslowski. But most of the hallmarks of early Kieslowski (by early I mean the first half of his career) are present here, making this an eminently watchable film. I wouldn't place it on the same pedestal as Blind Chance, but do watch it Sam - I'm sure you'll like it.