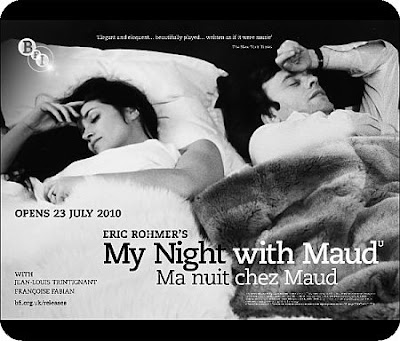 My Night at Maud’s was billed by its director Eric Rohmer as the third entry in his acclaimed Six Moral Tales series, though, interestingly, it released after The Collector because of the unavailability of its lead actor at earlier dates. Considered as not just the best film of the series but also as one of Rohmer’s finest accomplishments, this beautifully composed movie is a witty and delightful take on such serious topics as religion, relationship, marriage and morality. Jean-Louis (Jean-Louis Trintignant) is a practicing Catholic who has made the conscious decision of leading a “moral” life; however, he’s not bereft of normal human impulses, and his ensuing moral dilemma comes to fore when he ends up spending a night at the apartment of Maud (Francoise Fabian), a beautiful and intelligent woman he’s meeting for the first time and who his friend Vidal is seeing. Meanwhile he’s in love with Francois (Marie-Christine Barrault), a lovely young lady and a fellow church goer, despite never having spoken to her. Consequently, though he experiences an instant attraction to the exceedingly alluring Maude, he’s torn between his impulses and his willingness to remain loyal to the girl he intends to marry. The film’s most memorable section was undoubtedly the philosophical discourse that Jean-Louis, Maude and Vidal have at Maude’s apartment (the starting point for which was the famous ‘Pascal’s Wager’), and which is continued between the self-righteous Jean-Louis and the liberal-minded Maude after Vidal leaves. Wonderfully photographed in lilting B/W, very well paced, and comprising of excellent and restrained performances, what made this a masterpiece and such sheer joy to watch for me was Rohmer's expression of such profundity with such simplicity.

Hi Shubhajit, It's been sometimes since I've seen this one. I need to have a refresh on Rohmer. Many of his films it's been about 10 years since I've seen as that was the last time I went through them. Not sure if you've seen it, but my favorite Rohmer is Le Rayon Verte. It's quite something.

Thanks Jon for the recommendation. In fact, I plan to watch The Green Ray soon as other Rohmer aficionados, too, have strongly vouched for it. Given that it ranks as the favourite for so many, I'm already highly interested in watching the film soon.

One of the most celebrated of Rohmer's films, and one that is often mentioned as a personal favorite by admirers of the director. Yes, religion, mortality, and marriage are prodominant themes, and Trintignant is morally torn. Agree too that the discourse scene is the film's best, though it works throughout. Nestor Almendros's black and white cinematography is exquisite and teh film won the 1969 Palme d'Or at Cannes.

I really loved this film to the core. Such a delightful film despite its religious and philosophical overtones. In fact, though the movie's themes could at some level be placed alongside some of Bergman's works, this was still such a lighthearted fare to watch. A terrific exploration of moral dilemma too. And yes, the B/W cinematography too was quite stunning, as you've mentioned. Thanks a lot Sam for sharing your love for this Rohmer masterwork.