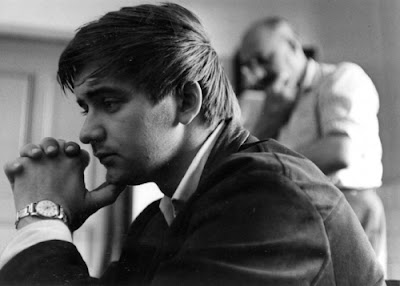 Milos Forman, one of the most prominent filmmakers of the Czech New Wave movement, made his feature film debut with Black Peter, a delightful, low-key comedy with subtle satirical undertones. Like a number of movies belonging to that movement, this has at its core a delectable and oftentimes hilarious coming-of-age story with an inherently humanistic point-of-view. The titular character, Petr, is a young, naïve and bashful guy who works in a departmental store and his job there is to spy on people in order to detect thefts. This peculiar job, for which he’s obviously not suited at all, results in a brilliantly concocted and incredibly funny sequence when he ends up tailing a seemingly respectable guy who he suspects of shoplifting. Meanwhile, like any teenager, he’s more interested in being with the beautiful girl he likes, attending dance parties and getting drunk; but, unlike most, he has one hell of a domineering father to deal with who loves lecturing him on everything under the sun – and this too forms a terrific source of humour. Though this seemingly simple tale the director also provided a number of pointed but beautifully cloaked jabs at the communist regime in which this movie, filmed in cinema vérité style, was made. Be it Peter’s acting as a watchdog albeit in civil clothes in order to notice prospective thieves (who might very well be representative of dissidents), or the shop’s manager receiving paintings when what he needs more are more basic stuffs, etc. – its wry sociopolitical satire is unmistakable. Like Truffaut’s The 400 Blows and Ray’s Charulata, the movie ends in a freeze-frame, but in a gleeful display of rebellion against cinematic boundaries and norms, the image of only one of the two characters (the father) is frozen, while that of the other (the son) continues to remain 'live'!

Forman's subtle satire in indeed what one takes from this accomplished early work most resonately. That suspected shoplifting seuence is indeed classic, and the cinema verite style works in making a number of political jabs. Excellent review!

Thanks Sam. Yes, its a delight to watch Forman's Czech films - no wonder he became such a prominent name in the Czech New Wave despite making only 3 films. In fact, all the hallmarks of what were to follow in the brilliant next two features are present in this debut feature of his.