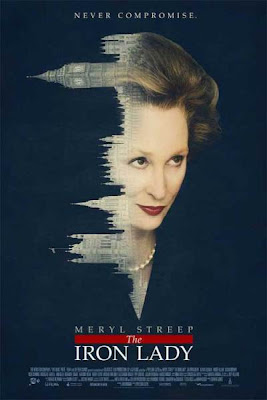 The Iron Lady has achieved the rare distinction of being made while the person on whom this biopic has been made, viz. Margaret Thatcher, is still alive. The other recognition that this movie can safely aspire to is the critics reveling on Meryl Streep’s fine turn as the eponymous ‘Iron Lady’. These apart, there is hardly much to speak on this rather insipid, asinine and one-dimensional character study. One cannot tell the story of a powerful and controversial former political figure like Thatcher without taking a stance. Perhaps the director wanted to separate Thatcher the person from Thatcher the former British PM, in order to portray her stripped off the ensuing sociopolitical angles, but that, I felt, was a poor artistic choice on the director’s front. She is presented here as an aged lady suffering from acute dementia and reminiscing about her life through the fast deteriorating mind of hers – consequently most of the action takes place in the present interspersed with occasional flashbacks. But, this desire of playing it safe by not bringing in much sociopolitical contextualization or commentary into the storyline turned this into a morose account of a dementia-stricken old lady than what it ought to have been. Further, whenever the narrative became anywhere near interesting, as in the chronicling of Thatcher’s political maneuverings or the hugely controversial Falklands War, the director cut them short and reverted to the present – a peculiar decision that made the film even more meaningless and tiresome to watch.

I didn't quite regard this film as dismally as you did, though I wouldn't give it anything over barely passable. The fact that Meryl Streep, who won numerous film critics' awards and the Oscar, gave an extraordinary performance (the ever-reliable Jim Broadbent as Dennis is very fine as well) is enough for people to give it a look-see. Still, I think the focus was all wrong sticking to that framing devise of Thatcher in Alzheimer's mode, and as a result the film was episodic and only intermittantly interesting.

You took the gloves off here, and delivered a persuasive knock-out blow!

Thanks Sam. Well, I too felt Meryl Streep gave a fine performance as the former British PM. Unfortunately, I found the film so uninteresting that I wouldn't really recommend someone to tolerate it just to watch Streep's acting. I guess she put in so much effort for the wrong movie altogether :)

Apart from Streep's spectacular performance, nothing else works in this terrible biopic, which is so badly written and directed. A disjointed mess that makes use of illogical narrative elements

Couldn't agree with you more. Streep's performance was the only worthwhile thing in the movie for me as well.

Streep's performance and that of David Broadbent, who plays her husband, Dennis, were the highlights of the film. The story is told in flashbacks and as we are told in terms of a demented, Margaret Thatcher. Not the best way to portray a woman of such substance. It is intimated that her son, Mark, was not and has not been a big part of her life. It was also intimated that Margaret Thatcher was not a big part of her children's lives. Not much was explained, it is all a perception. Much of what Margaret Thatcher went through as part of the House of Commons was also our perception. It looked like she had a great deal to overcome with her male colleagues, and the fact that she was the first Prime Minister is remarkable. That road in her life, needed much more emphasis.

Performances by Streep & David Broadbent were indeed really good - the fact that both of them are such accomplished actors who can seamlessly dissolve into the characters they portray helped them a lot. But yeah, as far as the movie goes, it was an utter disappointment - more so, as you rightly noted, Thatcher's complex, controversial and dynamic public life is such an easy fodder for cinematic adaptation. Thanks for stopping by.