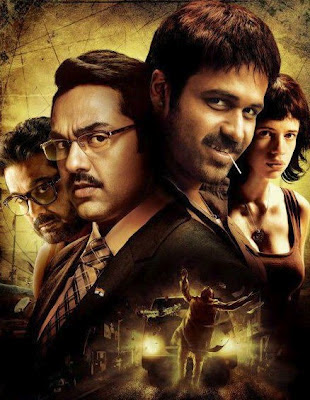 43 years after Vassilis Vassilikos’ novel was made into a scorching movie of the same name by Costa-Gavras, viz. Z, , it has once again been adapted for screen – this time by Indian filmmaker Dibakar Bannerjee. The fact that potent political thrillers could be conjured from the same source novel over a gap of four decades and in different geographical settings (the story here has been transplanted to India), speaks volumes about the prescience of the book as well as the relevance of its theme, viz. affirmation of the adage, “power corrupts; absolute power corrupts absolutely”. When Dr. Ahmedi (Prosenjit Chatterjee in a Hindi film after a very long time), a leftist university professor who has returned from the US to protest against the building of an SEZ that would displace loads of poor people in order to make way for the rich, gets killed by what is made to look like a road accident, lives of two men get irrevocably altered. Joginder (Emraan Hashmi), a sleazy videographer, and Krishnan (Abhay Deol), an upright but meek civil servant, get inadvertently involved in the murky affair, and gradually, courtesy a young lady who was besotted by the professor (Kalki Koechlin), they direct their attention towards getting to the root of the all-pervading corruption, which goes right till the very top. On the acting front Kalki has turned out to be the sole disappointment as nearly everyone has given noteworthy performances, while the fine photography and pacing helped in good mood creation and gripping portrayal of the filth, grime and corruption in every echelon of society, with SEZ politics acting as the springboard for that.

Shanghai is a kind of film that comes on very rare occasions to rejuvenate my faith on Bollywood. Subtle portrayal of gray area, unexpected changes of equations, inconclusive climax, and most importantly at the end you keep wondering about the dichotomy of right & wrong! A fervent activist ends-up writing a book, a murderer gets a job in IBP, a CM who was thought to bring India to glory ends up in court, a woman whose significance is not more than just being a wife of deceased gets an important position in IBP, and a sleazeball porno-movie maker does one thing right in his entire lifetime ends-up a fugitive!
That's way how it is in real world, the gray area between right & wrong is beyond layman's grasp, and this was communicated by Dibakar with sheer subtlety. Amazing!

Yes, indeed! The director never sacrificed realism or grittiness for the sake of easy appeal - he stayed true to the conviction with which he made the film, and that remains the biggest takeaway from the film.

As soon as I'd seen the trailer of Shanghai I'd come to know that this is slated to be Z transplanted to India. I'd loved the French film and hence was curious as to how this would turn up - I'm happy that it turned out quite well.

Thanks for sharing your views on this film here.