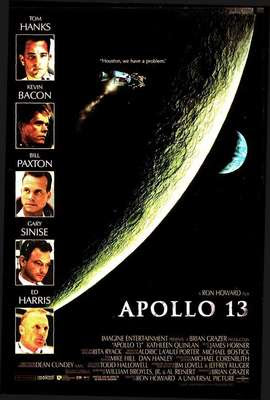 One of Ron Howard’s favourite subjects possibly is “triumph over adversity”, and he has made a number of popular movies based on that theme with Apollo 13 being arguably his finest moment under the sun. Though the ‘Space Race’, one of the most spectacular offshoots of the Cold War, is a thing of the distant past, the film did a fine job of harkening us back to that fascinating era; this also managed to be a highly engaging movie with the ability to captivate its audience despite it not being a thriller, or for that matter, how the movie ends being already known beforehand to all. Astronaut and team lead Jim Lovell (Tom Hanks), lunar module driver Fred Haise (Bill Paxton), and module pilot Jack Swigert (Kevin Bacon) – the latter a last minute replacement of Ken Mattingly (Gary Sinese) – take off for the moon in what was supposed to be the third manned lunar landing for NASA. However, due to some unforeseen technical glitches, they are forced to abort the mission midway, and now must find a way to return home safe – which becomes an incredibly challenging task given the fast depleting oxygen and electricity in the spacecraft and the chance of their being burnt alive while entering the earth’s atmosphere. Though stuffed with technical details, the movie was never overbearing, with the pulsating human drama, coupled with restrained performances by the ensemble cast and great production designs, ensuring that the whole – in this case a tense and uplifting tale of human courage, team spirit, and the willingness to fight till the very end – was far greater than the sum of the parts.

I saw Apollo 13 in the cinema in the days when it seemed Tom Hanks was everywhere and could do no wrong. I was impressed how suspenseful it was, and I think it helped I didn't know the history of the event too well. But it is also so effective that you are rooting for them despite knowing the outcome. That's a good point that it takes us back to that era.

Yes indeed. I'd watched Apollo 13 for the first time probably when I was in school, and I remember having liked the movie. Like you it helped me too be apprised of this important slice of history. Now that I watched it again after so many years I had some initial trepidation as to how it would hold up, but to my delight it did hold up very well. And yes, the fact that it manages to get one so deeply engrossed into the small details despite ours being aware of the outcome on a broader scale - that's what made the film really praiseworthy to me.

Howard gets a lot of crap but this is a very proficient, tense and entertaining film. Probably his best. Incidentally the first film I saw without my parents along which is kind of embarrassing if you do the math...

Haha, yeah, I'm sure being able to do the math, though personally I wouldn't like to comment on the first film I saw without my parents. And yes, in my opinion too this remains as Howard's finest work. Thanks Joel.

Yes, I agree that this may well be Howard's finest hour, though COCOON is innocuous enough, and FROST/NIXON has some great flashes of brilliance, even though it's uneven. Howard does seem to be the filmmaker most people love to hate, yet he has a real hoot in the Hollywood circles.

I have always mentioned APOLLO 13 to the Howard haters (I'm not a fan of his either) and most will concede it.

Thanks Sam. I too am not much of an admirer of Howards, though I've liked one or two of his movies. As for Frost/Nixon, I agree that it was a darn interesting film, and closest challenge for Apollo 13.