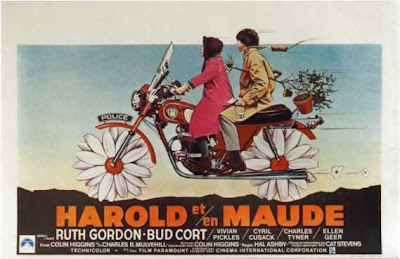 Harold and Maude, only the second directorial effort of Hal Ashby after a successful stint as an editor, remains one of the most eccentric romantic movies ever made. The fact that a film, which can be surmised as a budding love story between a twenty-something youth obsessed with death and a freewheeling lady who shall become an octogenarian soon, and with such an idiosyncratic point of view, whimsical nature, jet black humour, absurdist tone, morbid undertones, and the audacity to thumb its nose at societal conventions with such scathing glee, could even be made, leave alone attained the status of a cult classic, speaks volumes of the decade in which it was made, viz. the 70s – one of the greatest in the history of American cinema. Irrespective of what one’s preconceptions of the movie might be, the transcendental tale of friendship and unlikely love between its two oddball characters – Harold (Bud Cort), a glum, insanely rich and deeply lonely young man with boyish looks who keeps staging bizarre suicide attempts in order to seek attention from his hilariously detached mother (Vivian Pickles), and Maude (Ruth Gordon), a flagrantly anti-establishmentarian, mischievous and perennially optimistic 79-year old lady who is punch drunk on life – is both charming and bittersweet. The series of wacky characters were wonderfully portrayed, including Charles Tyner in what a parody of pompous, Vietnam-era army men; the profundity and universality of the script was exquisitely counterbalanced by the deadpan wit, wicked humour, and loony histrionics; and the soundtrack comprised of a string of marvelous Cat Stevens compositions, including the immortal “If You Want to Sing Out, Sing Out”.

Watched this again last week! Quite a special movie. Touching, funny, romantic and not quite like anything else. A cult classic to be sure and in fact, should be just plain CLASSIC if you ask me. Really funny too. I love how Harold gets rid of his prospective dates. Haha! Nice work Shubhajit.

Ah, a great movie to revisit Jon! Yeah, this was a lovely concoction of all the traits you mentioned. Though a darkly funny comedy, it also managed to be so delightfully humanistic & touching - but never, for a moment, overtly sentimental despite its seemingly sentimental theme - it was really such a wonderful mix of so many things, but just at the right amounts. And yeah, it sure is a classic :)

Thanks Jon for sharing your love for this film.

Very endearing and funny tale that made me realize just how beautiful life can be if you live it to the fullest. Also, made me realize how enchanting Cat Stevens' voice can be. Great review.

Thanks Dan. Yes, despite the satirical & darkly comic tone, the message it encapsulated was endearing & deeply moving. And the title track by Cat Stevens was quite amazing.