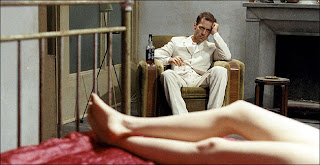 Directed by militant feminist Catherine Breillat, Anatomy of Hell doesn’t really deserve a review (by a professional, or as in my case, otherwise), even though the French lady has earned a certain reputation for her dare where tackling controversial subjects and depicting explicit content are concerned. Fat Girl, for instance, was a reasonably compelling watch. With Anatomy of Hell, however, she didn’t just blur the thin line between art and pornography, she crossed it with some distance to spare. The meeting of a bored lady and a misogynist gay guy, who she has paid to “watch” her, over a period of four nights, turned into a fest of one-upmanship where pretentious pseudo-philosophical rambling is concerned. It was in fact difficult for me to decide which was more intolerable – the director’s tawdry sermonizing (indeed, feminism has got to be a leading contender for the worst of all ‘ism’-s) or the nauseous flesh parade that would put even a porn director to shame.

Feminism is the worst of all the ism's?

I suppose if you view this film, or Breillat in general, as part of an agenda (as opposed to film-making) it's more difficult to find a pathway in ... especially if you think the agenda is representin' one of the worst there is.

I've seen several of her films, "Romance X" is the one that I enjoyed the most.

I know some people might have given a positive feedback to this movie and I don't want to insult anybody's intelligence, but honestly speaking I found this movie a whole lot of crap. I absolutely hate the idea of someone force feeding his/her strongly held beliefs into the viewers' minds - as if she is doing a big favour to humanity by bestowing enlightenment upon us illiterate souls.

I don't have anything against any feminist per se 'cos I believe in the dictum 'to each his own'. But these days it seems feminism has become nothing but the female equivalent of male chauvinism - as if the world would have been a better place if we men had sex change en masse. And that thing about gays being inherently misogynists - what was that?!? I don't have any gay friends so I haven't had the opportunity to deconstruct their psyche. But the logical corollary to that school of thought would be that all heterosexual guys hate men - or perhaps militant feminists without knowing!!!

I agree art is an extremely personal thing. Consequently it would be grossly unfair of me to judge everyone's line of thinking with my personal opinion. But I felt watching this was a terrible experience - with its ludicrous philosophising, grossly prejudiced line of thinking, excruciatingly pretentious pseudo-intellectual packaging, and visual content which was nauseating at times.

As I mentioned in my review, I felt her Fat Girl was a decent enough watch, and I was really expecting something that would act as a propellant for positive discourse. Hopefully Romance X which you have suggested would be a far better experience than this one.

p.s. I might have expressed a very strongly worded opinion. Please do not take this as a personal affront. Its just that I'm angry I could have spent that time watching a far better movie.

I'm not suggesting "Romance X", just said it was the one I enjoyed the most. ;)

Hopefully I too will ;P

What is wrong with "blurring the line" with pornography of that was indeed what the director intended? Aren't you staying within the comfort of your prejudice and the weight of your pre-conceived notions when you write something like that?

And feminism is the worst of all 'ism's'? Really? Why? Because you saw a film that you couldn't identify with or even like? And because of that the ideas shown in the film have no real-world importance? Feminism is bad. Wow. (I am a guy, by the way).

I would suggest you watch a film for what it is than you trying to impart your own expectations into it. Just a suggestion.