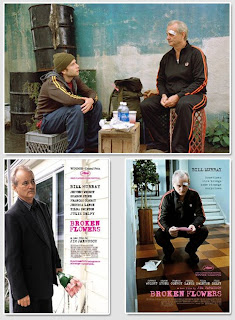 Broken Flowers, whose simple exterior belies its profound depth, is a contemplative dramedy from indie legend Jim Jarmusch. Jarmusch once stated that he is rather “interested in the non-dramatic moments in life”; this low-key comedy managed to emphasize essentially that. Starring Bill Murray, the uncrowned king of deadpan emoting, the movie is about a rich, bored and emotionally detached middle-aged man, who one fine day, after his latest girlfriend (Julie Delpy) leaves him, is informed by an anonymous letter that he has a son. That, and his neighbour’s coercive persistence, forces him to look up all his old flames to determine who might be the mother of his son. The quasi-mystery nature of the plot, however, is in complete to what the movie actually is – right from its minimalist composition to its subtle character study of a man who was once a modern day Casanova (his name Don Johnston is a play on Don Juan) – after all he had to be one in order to successfully woo a stunner like Sharon Stone, that too in her prime. This is a nice movie that has relied more on silences than on words to communicate the various shades of ’s character to us.

enjoyed the 'travel' scenes.
maybe that's what the director believes to be mundane.
but they stay in my memory.

I think he honed this trademark in his association with Anderson and that gang. I don't care much for the ghostbuster in him, but since "Groundhog Day" and onward, his stuff with Anderson, and "Lost in Translation" and this film, I think he's fabulous.

I'm going to have to watch "Life Aquatic" again real soon--my fave Anderson film (but NOT everyone else's!) It's such a beautifully weird meandering glop of 'quirky'! I can't get enough.

I like "Broken Flowers" very much, btw. More than "Darjeeling" to be sure. ;) And I'm not really a Jarmusch fan.

Oh man, what an amazing film this one is. Especially if you have been following Jarmusch chronologically. Funny that my favorite Jarmusch films are the two most trashed ones - Broken Flowers and C&C.

Jarmusch is one of my 5 movie gods and he deserves more exposure for sure. The final shot of Broken Flowers seems like kind of a boundary between his kind of filmmaking and the "other world". A moment of intense drama with conventional character motivations seeping in. Brilliant film.

@Kartikey: Yep, as the movie shows, there's beauty even in the mundane...

@Sitenoise: Yeah, despite the common link between most of Bill Murray's famous roles, he still can startle you everytime. His performance in Groundhog Day was one the best, and not just of Murray! Comparisons aside, this is indeed a very well made movie.

@Seventh Art: More than the quality of the work, this is also an usual film - unusual not just in its depiction of the "non-dramatic moments in life", but also, as you mentioned, in being able to rise beyond a conventional character study. By the way, who are your other 4 movie gods?

this is a great performance by Bill Murray, indeed

Ah, My holy pentagon so far consists of:

I am yet to explore so many many directors, so this may change with the years.

A very eclectic list, and impressive too I must say!!! I believe our favourites are a vital defining parameter of who we are - they change at the same rate as we do. And well, as the old platitude goes, the only thing constant in this world is change...