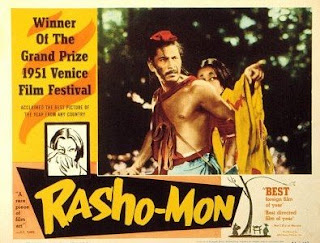 The most famous Japanese movie and legendary filmmaker Akira Kurosawa’s best known work, Rashomon ranks among world cinema’s greatest masterpieces. Borrowed innumerable times by various directors, this was the first movie that introduced what is known as the ‘Rashomon Effect’ – contradictory/conflicting chronicling of the same incident by the various observers of the event. Set in the 11th century and employing flashbacks inside flashbacks, the movie recounts what might have transpired which led to the rape of a woman and the murder of her husband allegedly by a samurai (played with explosive unpredictability by Kurosawa regular Toshiro Mifune). The camera work is exemplary – who can ever forget the scene where the woodcutter (narrator) is walking into the jungle before he discovers (?) the crime scene. A horde of cameras at various angles and speeds were used to record the motion of just a single character, making this one of the most unforgettable sequences in film history. At once ominous and reflective, Rashomon is most memorable for its brilliant exploration of the thin line between ‘truth’ and ‘perception’.

Ooh, what a film. One film that keeps me from losing hope in movie-watching

I'm sure you have a host of other films in that list as well :)

oh I really loved seeing this film it is so amazing The most famous Japanese movie and legendary filmmaker Akira Kurosawa’s best known work,love them for their excellent work.

Rashomon (羅生門 Rashōmon?) is a 1950 Japanese crime drama film directed by Akira Kurosawa, working in close collaboration with cinematographer Kazuo Miyagawa. It stars Toshiro Mifune, Masayuki Mori, Machiko Kyō and Takashi Shimura. The film is based on two stories by Ryūnosuke Akutagawa — ("Rashomon" provides the setting, while "In a Grove" provides the characters and plot).

Rashomon introduced Kurosawa and the cinema of Japan to Western audiences, albeit to a small number of theatres, and is considered one of his masterpieces. The film won the Golden Lion at the Venice Film Festival and also received an Academy Honorary Award at the 24th Academy Awards.