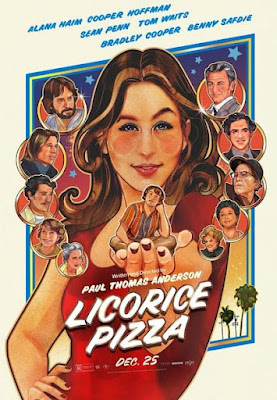 Licorice Pizza was perhaps the most loosely structured and therefore atypical work in PTA’s oeuvre – coming after a string of formally rigorous and ambitious films – even if it did hark back the element of nostalgia for a lost (and freer) time, and the freewheeling narrative styles, of Boogie Nights and Inherent Vice. By focusing on first love, charming coming-of-age and idiosyncratic experiences, it managed to be amusing, carefree and whimsical on occasions, with a surprisingly unmoored script. However, alongside that, it was also too sketchy, sentimental and thematically insubstantial to be taken seriously. It, in fact, might’ve worked better if it was either more compact with some of the chaff edited out, or had its scope been broadened to provide a more sprawling evocation of the period. Set in California’s San Fernando Valley in early-70s – where Anderson himself grew up – it chronicled the unconventional friendship turned romance between Gary (the great Philip Seymour Hoffman’s son Cooper Hoffman), a precocious 15-year-old child actor and incorrigible entrepreneur, and Alana (Alana Haim), a gauche and confused young woman 10 years his senior. Their relationship – traversing through camaraderie, business partnership, jealousy, conflicted feelings and love – was regularly interspersed with asides that imbued the proceedings with an episodic form and rambling flavour. Its most hilarious episodes involved wealthy, neurotic and self-absorbed men they come in contact with – Sean Penn as a motorcycle-loving film star modelled after William Holden, Tom Waits as a garrulous director, Bradley Cooper as an irascible producer, etc. The lovingly shot and joyously scored movie had potential – given the ideas and evocative set-pieces it contained – but stopped short of being anything much beyond an erratic love story and cute nostalgia trip.