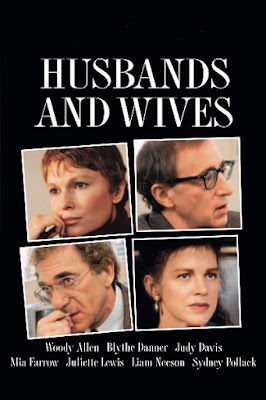 Husbands and Wives, Woody’s fabulous take on his idol Bergman’s Scenes from A Marriage, might well be the last masterpiece in his prolific filmography thus far. Mordantly funny, incredibly penetrating, wryly ironic, deeply perceptive, and filled with elements of docu-drama, the film provided a darkly fascinating examination on marriage, fidelity and neurosis amongst Woody’s pet demography of intellectual, urban, upper middle-class. When their best friends Jack (Sydney Pollack) and his striking wife Sally (Judy Davis) casually announce during a dinner invitation that they have decided to split, the news do not just infuriate Gabe Roth (Woody) and his wife Judy (Mia Farrow), it literally rips apart the veneer of their seemingly happy married life by bringing to the surface rarely spoken discontents and dissatisfaction in their relationship. While Jack starts dating a pretty, dim-witted aerobics instructor (Lysette Anthony) and Sally plunges into a tentative affair with the dandy and younger Michael (Liam Neeson), it’s clear that neither relationships would last long. On the other hand, Gabe, a novelist who borrows freely from his own life, starts getting deeply besotted with his precocious student (Juliette Lewis) who hero-worships him, while Judy finds her infatuation towards Michael, who’s her colleague, turning into love, and one realizes that their lives have started taking divergent paths. Faux-interviews of the characters were slyly juxtaposed with the narrative, which added to the film’s brittle, pungent, self-deprecatory, bare-knuckled and at times disconcerting humour (given Woody and Mia’s scandalous break-up during the time of the film’s release) and underlying melancholia, aided in no small parts by the savage, witty and perceptive script, terrific character arcs, and fabulous performances by the ensemble cast.

Excellent analysis here Shubhajit! I know some would argue that VICKY CHRISTINA BARCELONA is Woody's last masterpiece, but I am not so sure I would. Yes, it is Bergman who is again the inspiration for a film that boasts all the qualities you pose in a trenchant and economical look an an essential film in Allen's filmography.

Thanks a lot Sam & apologies for the late response. Yes, Vicky Christina Barcelona was indeed a good film, as were quite a few films made after Husbands & Wives (Deconstructing Harry, Match Point & Blue Jasmine are among my favourites among that lot). But I would stop short of qualifying them as masterpieces.