A Pigeon Sat on a Branch Reflecting on Existence [2014] 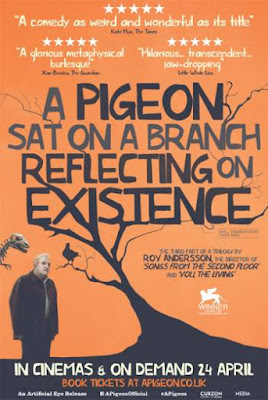 The beautifully titled A Pigeon Sat on the Branch Reflecting on Existence brought to close Roy Andersson’s droll, poignant, episodic and highly ambitious ‘Grandeur of Existence Trilogy’, which comprised of Songs from the Second Floor and You, the Living, and made 7 years apart from each other. Mordant humour, deadpan observations on the perils of modern existence, melancholic undertones, stylized production designs, static camerawork, multiple tableaus stringed around a central narrative, and meditations on such themes as mortality, unemployment, loneliness, socio-economic oppression, and so forth, imbued the trilogy with the feel of one continuous show shot as three different films. The central tale dealt with the woes, frustrations and existential crises of Sam (Nils Westblom) and Jonathan (Holger Andersson), two travelling salesmen striving in futility to sell novelty items intended to make people laugh – ironically, sight of the two glum, ageing and down-on-luck men, with no companions but each other, and living in claustrophobic apartments, was anything but smile-inducing. Various vignettes were woven around this – the bitingly funny sequence where the sons of a dying lady try to get hold of valuables clutched by her as she’s convinced she can carry them to afterlife; an enthralling and deeply tragic musical interlude where a partially crippled waitress at a bar rouses emotions among a group of young, sad-faced war drafts many years back; Charles XII, the glibly callous Swedish king, making a stop at a diner in order to make a trip to the loo; et al. Despite the been-there-seen-that feel that is bound to emanate having watched the earlier two films, on its own this once again managed in being a simultaneously playful and bleak work filled with striking visual signatures and a running sense of pathos.

"Mordant humour, deadpan observations on the perils of modern existence, melancholic undertones, stylized production designs, static camerawork, multiple tableaus stringed around a central narrative, and meditations on such themes as mortality, unemployment, loneliness, socio-economic oppression, and so forth, imbued the trilogy with the feel of one continuous show shot as three different films."

Yes indeed Shubhajit! Brilliantly stated! I saw this splendid film a few weeks ago and was mightily impressed, though I am a longtime advocate of Anderson's work - the two you mentioned that preceded PIGEON and also A SWEDISH LOVE STORY. The guy dropping dead of a heart attack when the woman cooked, the old woman in the bed refusing to let go, the anarchic scene in the mess hall, all had me going. Anderson is a singular talent. A great review here!

Thanks Sam. My favourite of the trilogy would be a toss-up between Songs from the Second Floor & Du Levande (You, the Living). A bit of "diminished returns" set in here, methinks - that might not be a bad thing though, as this clearly elucidated the distinctive signature that Andersson succeeded in developing that made the trilogy seem as one continuous saga made as 3 features. And, as a standalone film, it comprised of dark humour, pathos, perceptiveness & so much more. Yeah, the 1st scene where the guy drops dead while trying to open a champagne bottle marvelously set the tone for what was to follow.