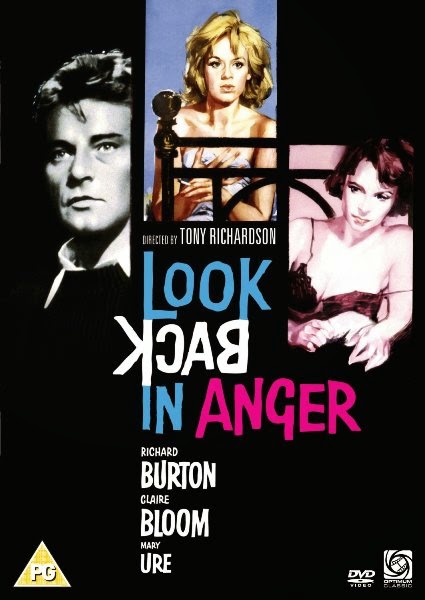 Look Back in Anger, adapted from John Osborne’s hit play that spawned the “Angry Young Man” persona and influenced a generation of British artists for its “kitchen-sink realism”, was a bleak, gritty, incendiary and powerful portrayal of existential angst at the backdrop of a destructive love triangle in a working-class milieu. Jimmy Porter (Richard Burton) is a bitter, cynical and disillusioned man in a turbulent relationship with his lovely, fragile wife Alison (Mary Ure), with whom he lives in a dingy apartment at a dreary blue-collar neighbourhood; during day time he runs a small store at the local flea market with his sole friend (Gary Raymond), while post sun down he loves dabbling in jazz music with his trumpet. His self-loath, barely suppressed anger and derision for the upper class has seeped into his marriage, which his loving wife is often at the receiving end of; things become further complicated when Alison learns that she’s pregnant, followed by a visit for a few days from Alison’s strikingly attractive and outspoken friend Helena (Claire Bloom), a struggling actress for the stage, with whom Jimmy gets embroiled in a torrid affair. Burton gave a volcanic performance as the film’s volatile protagonist, succeeding in evoking empathy despite his brutish behavior, while both Ure and Bloom were, too, gave fine turns as the quintessential “wife” and “whore”, respectively. The incisive script marvelously captured the play’s fury, ferocity and edginess, the deep sense of tragedy and fatalism was superbly visualized through the moody, expressionistic B/W photography, and the brilliant, throbbing jazz riffs added a melancholic air to the downbeat atmosphere and complemented the collective anger of a generation against social injustices and class system voiced by the protagonist.

I see it as a British equivalent to A Streetcar Named Desire (1951), not that they are the same, but they do have similarities.
It was quite good, think I liked it a little less than you. The pregnancy issue is a bit dated now, but with great acting and dialogue. As you say, Richard Burton delivers an explosive performance.

Burton had such a rich range as an actor (another fabulous performance of his - The Spy Who Came in from the Cold - was completely opposite to the one here), that it's unfortunate that so many folks just remember him as Elizabeth Taylor's husband.