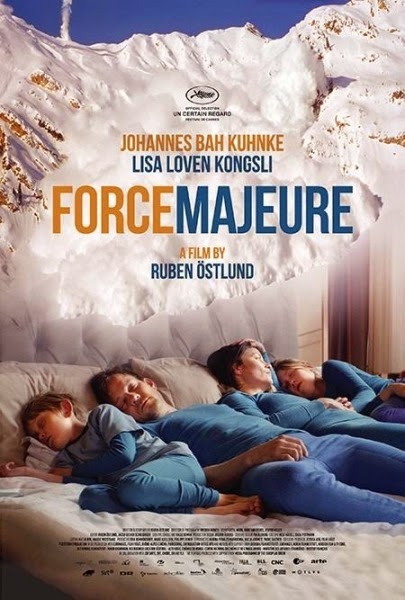 The aptly titled Swedish psychological drama Force Majeure provided a pointed jab on the social construct and presumptions that form the basis of the conventional definition of a family. The split-second choice that results out of a sudden and unavoidable catastrophe was used by the director Ruben Östlund to launch a potent commentary on the patriarchal nature of our social fabric, with husbands and fathers playing the traditional role of protectors and saviours, thus making this both an effective marriage drama and a sly social satire. Tomas (Johannes Bah Kuhnke), a wealthy Swedish businessman, while on a 5-day skiing vacation in the incredibly scenic and tranquil French Alps with his wife Ebba (Lisa Loven Kongsli) and their two kids, panics, in a disastrous choice, flees, when a controlled avalanche goes awry. Even though, eventually, the moment of panic seems ill-founded, the very fact that his survival instincts had gotten the better of his judgement start slowly eating away the very foundation of their marriage – it starts with little itches and gradually evolves into a full-blown crisis which takes them dangerously close to marital collapse until, in another unanticipated, but in this case fortuitous development, an act of masculinity and courage restores his place of honour in the family. In one brilliantly staged sequence, the relationship between their friend Mats (Kristofer Hivju) and his young girlfriend (Fanni Metelius), experience a mini-crisis when they become inadvertent witnesses to Tomas and Ebba’s growing marital breakdown. Heavily recalling Haneke’s cinematic style, the stark, blinding white visuals marvelously captured the film’s wry and cold tonal palette, and its unsettling critique of bourgeois banality, hypocrisy and conflict.

Great review! Currently in my top 10 of 2014 films. Like you say, a social satire. I thought it was an entertaining look at the modern family and gender roles, with humor and realism so we wonder how we would have reacted in those situations. How it's tough to live up to pressures put on us by stereotypes in society.

(SPOILER: The ending, for me the wife deliberately "got lost" in the snow storm so her husband could "rescue" her. To me it was not a heroic masculine moment but her manipulating the situation so he felt heroic and the kids perceived him as brave. I might be wrong, that's my interpretation of the scene.)

Thanks Chris. Yes, societal pressures on account of gender roles in a heteronormative social structure, was very well critiqued here. I wouldn't go with your interpretation of the ending (I feel that's a tad stretched), but yes, that certainly is one way of looking at it. I still feel the scene was placed to reinforce the gender balance (and hit a cheeky punch in the process) after having shaken the applecart earlier.