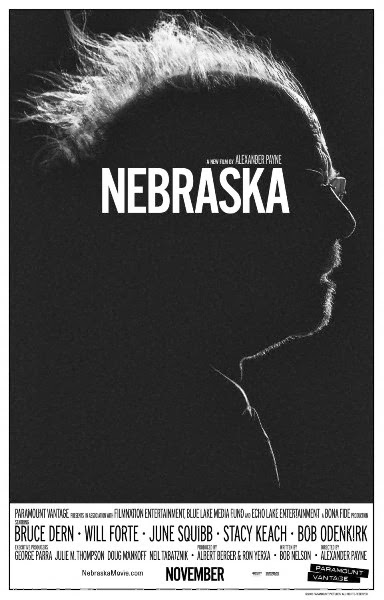 Nebraska is an engaging road movie, and a tender and affectionate father-son tale. Except for the rather stretched and maudlin ending, for most parts Payne succeeded in maintaining a delicate balance between whimsical nature and light humour, on one hand, and sentimentality on the other; traces of Jim Jarmusch were often discernible in this low-key and likeable, albeit slight, serio-comedy. Woody Grant (Bruce Dern), an ageing and retired Montana resident with a fast failing mind, is convinced that he’s won a $1 million lottery and is hell-bent in going to Nebraska, by foot if required, to collect the sum. His sons, however, immediately realize upon reading the letter that it’s nothing more than a sham. But, with Woody impossible to be reasoned with, his younger son David (Will Forte) decides to pamper his unreasonable wish – if not for anything else, just to spend some time with him. Thus, he takes leave from the store he works in, and embarks of the journey. There, they’re joined by Kate (June Squibb), Woody’s cantankerous but loving wife, and Ross (Bob Odenkirk), his well-established elder son, and have a dubious family reunion too. Getting to know of his windfall, his relatives and former acquaintances try to establish shares of their own, thus opening old wounds. And, through all this, David finally gets to know his father. Dern gave a startling and deeply affecting turn as the seemingly gruff, laconic and self-centered man but with a soft soul, while Squibb provided some ribald fun – particularly in the darkly hilarious scene at the graveyard. The B/W photography beautifully captured America’s vast open spaces and road network, and was nicely accompanied by the lilting score.

Good assessment of the film. I usually love Alexander Payne, and the performances are great, just the story in Nebraska I found a bit dull and unmemorable. I have been told by someone it nails quite well how the Nebraskan people behave. Perhaps I need to give it a rewatch.
I didn't think it was as emotionally involving or laugh-out-loud funny as the films Payne co-wrote with Jim Taylor. I wish they would start collaborating again, 2011's The Descendants I was also let down by.

Thanks Chris. Read in one of the reviews of the film the critic opining that, going by this film, Payne loves Nebraska but isn't in love with Nebraskans. I'm not really aware how Nebraskans behave, but your comment reminded me of the above-mentioned remark. I'd liked The Descendants slightly more than this. I need to watch Payne's earlier films, though - particularly About Schmidt & Sideways.

I completely and utterly disagree with Chris on NEBRASKA's story being "dull and unmemorable" and apprerently just about every critic worth their salt and the overwhelming majority of audiences (and a little Cannes, anyone?) clearly feel as I do. I hope Chris will rely on his better instrints and give it another shot. This was my 16 year old son's absolute favorite film of the year, and it did also finish in my own Top 10. The humor is film is subtle and tinged with melancholia, yet some of June Squibb's liners are as laugh out funny as you'll get in any film. I do agree that THE DESCENDANTS was Payne's weakest film, though I still generally liked it. Interesting that you would bring in Jim Jarmusch here.

I was rooting so hard for Dern to win the Oscar.

Thanks a lot Sam for your passionate response. I found this a reasonably good film with an excellent turn by Dern, some fine photography & a fix mix of whimsical humour & poignancy. But the overtly sentimental ending slightly undid the good work, I felt. Anyway, regarding Chris' reaction it, to each his own, I guess - yes, most have liked the film but there are also quite a few I'm aware who didn't think much of it.

Nebraska was always going to be a winner with me. Aside from my adoration of Alexander Payne, I love a road movie, and what I've termed the "male adventure in self discovery". Dern is excellent; I thought this was another winner from a terrific writer-director.

Thanks Dan for sharing your appreciation of the film. I too am highly fond of road movies, and Dern was most certainly excellent in it.