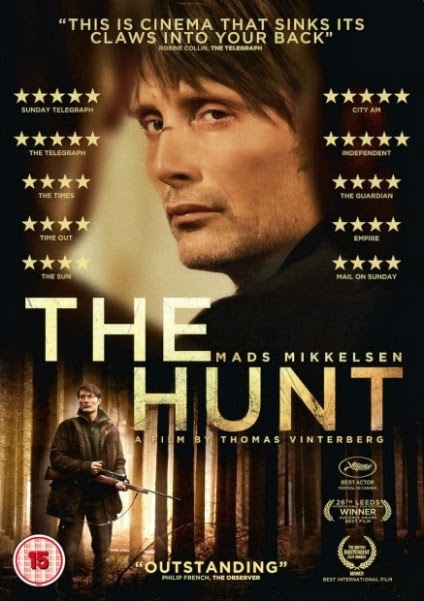 When a child makes a complaint that is sexual in nature, the accused adult, instinctively and by default, comes under suspicion. As legal action is pursued against him on one hand and he becomes a social pariah on the other, the onus of proving his innocence curiously shifts on him. But, what if the accusation was a figment of the child’s imagination to begin with? Directed by co-pioneer of the Dogme 95 movement, Thomas Vinterberg’s The Hunt is a relentlessly grim, deeply disturbing and thoroughly captivating exploration of that. Lucas (Mads Mikkelsen), a divorced man working at a local kindergarten and striving to be allowed more time with his teenaged son, is a well-liked member of the community in the small Danish town he resides in – he is loved by the kids and bonds well with his all-male gang. He is also tentatively venturing into a relationship with his attractive colleague (Alexandra Rapaport). His well-set life, however, comes crashing down when the kid daughter of his best friend Theo (Thomas Bo Larsen), out of spite, makes wrongful allegations against him. In a matter of moments he becomes evil incarnate in everyone’s eyes, wreaking havoc on him both physically and psychologically. The downward spiral of his life was brilliantly paralleled with the increasingly vengeful and vicious reactions of the seemingly civilized and reasonable people around him who used to consider him a friend, as they pronounce him guilty without even giving him a chance. Mikkelsen gave an astounding performance – the scene in the church and the one in the supermarket were just shattering, while the cinematography, that gradually took darker hues, aptly complemented the film’s changing mood.

Terrific review Shubhajit! The film is elevated greatly by the electrifying turn of Mads Mikkelsen, an accomplished and versatile thespian who won the Best Actor prize at Cannes for this performance. A caring and compassionate man, his Lucas is mainly introverted until he so seriously damaged by the emotional disaster that he turns to uncharacteristic rage. His role recalls Dustin Hoffman’s in Sam Peckinpah’s Straw Dogs, as a quietly intense and mild mannered academic, who is victimized by a raging out-of-control lynch mob. Like Hoffman, Mikkelson sports a raw intensity driven by the heights of injustice and savagery to uncharacteristic retaliation

Thanks a ton Sam. Yes, Mads Mikkelsen's turn, with all the barely controlled anger, frustrations & hopelessness, made the film a great watch. Interesting comparison you've drawn out with Hoffman's turn in Straw Dogs - unlike the explosion at the end in the Peckinpah, here it was more restrained yet incredibly effective (I'm referring, in particular, to the outburst in the church).