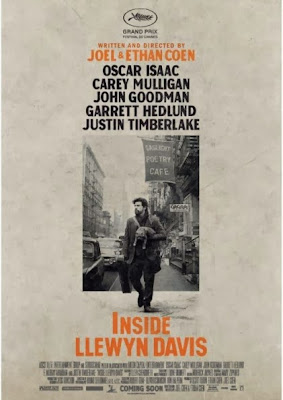 Inside Llewyn Davis is a solemn, bittersweet, and pessimistic pastiche on the 1960s folk-music scene in New York’s Greenwich Village, with themes that included social maladjustment, existential crisis, artistic struggle, bohemian spirit and the marginalized nature of folk music. This is Coens at their mellowest, even if it wasn’t bereft of malaise, wry ironies and sparingly used deadpan humour. The narrative chronicles an exceptionally bad week in the life of its protagonist (Oscar Isaac) – the struggling folk-singer’s sole album isn’t selling as his brand of music doesn’t have many takers, his performing partner has just committed suicide, he’s completely broke and needs to crash at random peoples’ places, and he’s mistakenly impregnated the fiancée (Carey Mulligan) of a friend. And, if that wasn’t enough, his increasingly self-destructive nature and caustic nature is alienating the few friends that he has left, and the cold, harsh weather perfectly juxtaposed his growing bitterness and hopelessness. He makes a road trip to Chicago to audition for an impresario who doesn’t find commercial prospects in his songs, and the ride he takes is particularly depressing on account of a surly, hulking and drug-addicted Jazz musician (John Goodman) and his taciturn valet he gets paired with. The sole saving grace for this outsider is his guitar, his songs, and his burning talent. The film’s circular structure made the proceedings seem like a bad dream, while the stunning photography brilliantly evoked the mood, atmosphere and nostalgia. Though the humour was tad coarse at times and the utter pointlessness of Llewyn’s life perhaps over-stressed, fine performances and the string of melancholic, soulful songs more than made up for that.

Yet another superlative review Shubhajit! INSIDE LLEWYN DAVIS is an oddly intoxicating film with a spectacular folk score and cinematography, but it does fall short of the masterpiece status some of are greeting it with.

Yes, I agree with you - this isn't a masterpiece and the Coens have most certainly made better films, but its a pretty good film nonetheless. The latent nostalgia & melancholia in the gray-washed cinematography & lilting folk songs really had me hooked.