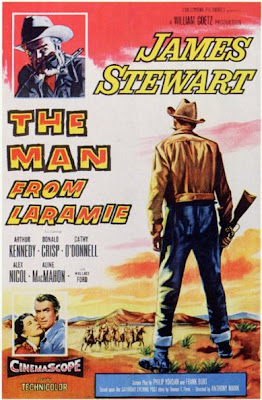 The tense and gripping psychological Western The Man from Laramie was the final collaboration between Anthony Mann and James Stewart, and bore traces of King Lear. Like their other collaborations, this too provided an edgy glimpse into man’s primordial penchant for revenge and quest for violent retribution, and told a tale of obsessive manhunt. Will Lockhart (Stewart) arrives in the frontier town in New Mexico purportedly to deliver supplies. But his real intent is to seek vengeance for the massacre of an Army cavalry his brother was a part of by Apache Indians by killing the man who illegally sold repeater rifles to them. The town, as it turns out, is owned and ruled by a wealthy but ageing cattle baron (Donald Crisp). Lockhart, during his quest, gets enmeshed into a brewing feud between the patriarch’s psychotic son Dave (Alex Nicol) who is perennially insecure of his masculinity, and the sensible ranch supervisor Vic (Arthur Kennedy) who believes that he deserves a share of his employer’s property. The film abounded in moments of disquieting violence, particularly in Lockhart’s volatile tussles with Dave – the scene where Lockhart’s wagons are destroyed and his donkeys killed by the sadistic Dave set the tempo, which reached its crescendo when Dave shoots at Lockhart’s palm in cold-blood in return for being shot at moments back. Gloriously photographed in Technicolor with the rough and arid locales providing the perfect juxtaposition to personal and familial turbulences, the film’s disconcerting thematic overtones were nicely balanced by few moments of softness, and boasted of fine turns by all led from the front by Stewart’s superb portrayal of the disturbed loner.

This is Mann’s absolute masterpiece, his greatest film, and a contender for the greatest western feature of all-time. It’s a complicated tale of familial strife played out with the veracity of Shakespearean drama (great point there mentioning LEAR!)with the tragic underpinnings of Greek theater. It a prime example of the use of the hostile landscape to mirror the mental state of the characters, and it’s use of space is enhanced by the fact it’s the only one of the five Stewart-Mann western collaborations to be filmed in Cinemascope.

Thanks a lot Mann. Though Naked Spur has historically received the most adulation among all of Mann's Westerns, I'm glad to note that you agree that this was the best Mann-Stewart collaboration. Naked Spur was undoubtedly good, but this was better on account of the complex thematic underpinnings that Mann laced this film with.

Its sad that in the Western polls or lists that I've seen on the Web, I don't remember having seen this film featuring in them, though it surely should.