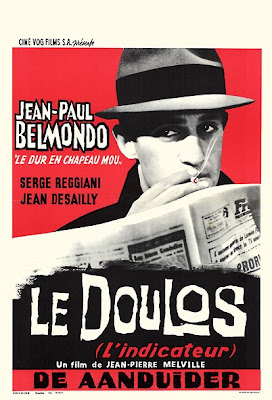 Jean-Pierre Melville, for me, represents the epitome of gangster films drenched in fatalism, existential nihilism and the blurring of good from bad, even though classic American film noirs abounded in them. He had made a couple of crime films earlier, but Le Doulos was the first in a string of films that emphatically dealt with the above mentioned themes, along with elusive concept of honour among thieves, and with distinctively sparse, detached, hardboiled and morally ambiguous style and tone; it, therefore, had an emblematic role in his career. The film’s two principal protagonists are both career criminals with shady pasts and dubious morality. Maurice (Serge Reggiani), who has just been released from prison, kills a guy who, until then, appeared compassionate to him, and runs off with his money and loot; Silien (Jean-Paul Belmondo), who initially appears to be a good friend of Maurice, might be the police snitch who has double crossed Maurice while he is on a job. The labyrinthine story was thus characterized by a dark, foreboding and inherently complex note, with the narrative, featuring the psychological duel between the two anti-heroes, regularly switching between them. Though the threads are eventually tied and misunderstandings cleared, as is Melville’s wont things don’t end well for either in perfect compliance with Murphy’s Law, viz. if things can go wrong, they do. Reggiani was good as the weary romantic, while Belmondo was excellent as the enigmatic and smooth-talking cynic. It was shot in B/W dominated by chiaroscuro lighting and a number of deceptively long takes, and had a minimally used jazz-based score.

p.s. This is my 900th review here at Cinemascope. It was only perfect that the mark was reached through review of a work by one of my favourite filmmakers.

My recent review of this film can be found here.

Congratulations on reaching 900 Shubhajit! And yes, Melville is one of your favorites and a deserving artist to collaborate with you in reaching that milestone. Yes, I'd also agree that fatalism and existential nihilism are central to this particular Melville and some others in fact. Fascinating capsule!

Thanks a lot Sam. I love good portrayals of fatalism & existential nihilism in general - no wonder I love noirs :) And yeah, it was purely coincidental that a Melville film helped me reache this small milestone. Just love his works.

Interestingly, my first tryst with Melville had been Le Samourai, and though this remains as his single most famous work, I didn't like it much then. But, over the years I've realized that the reasons for which I didn't like the film are, ironically, the same reasons for which I love most of his works. So I really need to revisit the film, and I'm planning to do that sooner rather than later.