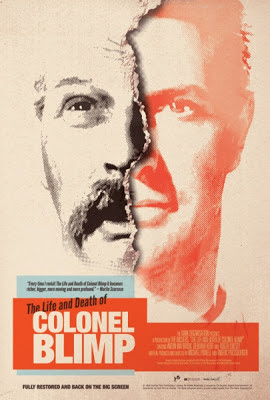 The Life and Death of Colonel Blimp, qualified by some critics as Britain’s Citizen Kane, was the most celebrated film of the Powell-Pressburger directing duo; it also earned the wrath of Winston Churchill and his cohorts. Adapted from a popular cartoon strip, the film chronicled several decades in the life of an army man (from Boer Wars till WWII), along with providing a mildly amusing peek into British traditions, mores and mannerisms. It also provided a fair share of commentary on the realpolitik of war (as opposed to its more gentlemanly counterpart). But most importantly, this was a film awash with nostalgia about, in absence of a better phrase, the ‘good old days’. The film began, however, on a very different note – the superb opening sequence (which takes place in the ‘present’) gave it the feel of a witty, funny and biting satire on war. But, as the narrative moved to an elaborate flashback mode, chronicling the life and times of the erudite and mild-mannered British officer Clive Candy (marvelously played by Roger Livesay), both its tone and theme underwent dramatic reversals, thus ensuring that it never managed to sustain its initial brilliance. Nonetheless, the film does remain noteworthy on account of its epic scope and sepia-toned, albeit overtly sentimental, look at changing times. The temporal shift of Candy’s life from ‘present’ to 40 years back was accomplished in a memorable single take, and Deborrah Kerr played the roles of three separate ladies in Candy’s life; interestingly, Angelopoulos employed both these cinematic devices in Ulysses’ Gaze, which could possibly be construed as an expression of the film’s importance in his eyes.

I'm just Diving into Powell and Pressburger films (i've watched 'Black Narcissus', 'The Red Shoes', and 'A CanterBury Tale' so far) and I've loved each of them (A Canterbury Tale being my favourite) this one was one I was looking forward to seeing. It seems you didn't love it, what do you think of Powell and Pressburgers other films? Where does this one rank on your favourites by them?

Well, its not that I disliked the film, but yes, I didn't really love it either. Unfortunately though, this is the first film of the duo that I've seen, with the assumption that, since this is their most widely acclaimed film, it'll propel me to their other films. I'm eager to watch Powell's Peeping Tom soon, though.

In the meantime if you watch this film, I'd be really keen to know how it stands vis-a-vis their other films that you've watched, since they too are acclaimed in their own rights, as also Matter of Life & Death, another of their renowned works.

Thanks Brian for stopping by.

This is one of the greatest films of all-time (one of my three favorite British films with KIND HEARTS AND CORONETS and THE THIRD MAN). It's a deeply reflective and moving film about getting old and those fleeting times when memories are etched forever. Roger Livesay is extraordinary.

Thanks Sam. Yes, I'm aware of its standing in the pantheon of British classics, and how revered it continues to be even to this day. No wonder, it is also part of Sight & Sound's list of 100 best films. But, that said, I'd probably have liked it more had the sentimentality been reined in a bit.