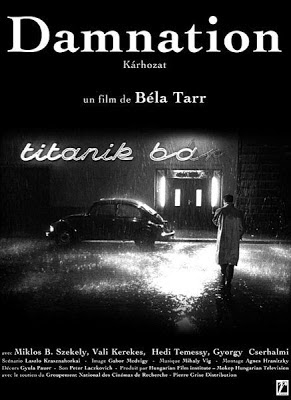 Damnation was a watershed moment for Hungarian filmmaker Bela Tarr, as it established the visual style and rigorous formalism that defined his works thenceforth. It was also a terrific introductory piece to his follow-up film, Satantango. The protagonist here is a morose, alcohol-addicted pseudo-intellectual called Karrer (Miklos B. Szekely) who is in love with a highly alluring bar singer (Veli Kerekes). However, unfortunately for him, she is highly fickle about their affair, and she is married to a man who scares him. So, when the manager of Titanik, the bar where she croons, offers him a shady job, he passes it on to her broke husband. This doesn’t just give him the opportunity for some quality intimacy with her, it also provides him on a platter the chance to exact a sweet revenge. The plot might remind one of 40s noir, but Tarr’s tonal, thematic and stylistic decisions made this an austere and bleakly beautiful portrayal of small-town ennui, anomie, isolation, existential alienation, moral decrepitude and stasis. Shot in high-contrast B/W, using his trademark audacious single takes, the film’s visual signature is quintessential Tarr. The desolate, depopulated and grimy wastelands, and the perpetual state of rain and mud, against which he juxtaposed his weary characters, were essential to the film’s mood and tone, as were the long moments of silence and inaction. Tarr’s fascination with long, loosely choreographed dance sequences, too, was on mesmeric display here. Interestingly, it is a rarity in Tarr’s canon in that it comprised of far more music – albeit played on-screen as opposed to background score – than is generally the case with his films, including a lovely song.

"The plot might remind one of 40s noir, but Tarr’s tonal, thematic and stylistic decisions made this an austere and bleakly beautiful portrayal of small-town ennui, anomie, isolation, existential alienation, moral decrepitude and stasis."

Beautifully described Shubhajit. The rain and mud seems to be his essential setting, and it's part of the setting in WERCKMEISTER, SATANTANGO and his final film THE TURIN HORSE. The tone and style is consistent with every other film Tarr has done. It appears that THE TURIN HORSE will be taking the #1 spot for my 2012 list.

Thanks a lot Sam. The visual designs in Tarr's films are really so uniquely Tarr as to be immediately identifiable. His usage of external grime & dust to complement his characters' isolation & inner wastelands is really remarkable. I consider Turin Horse as a 2011 film, but had it released in 2012, it would have been my #1 film as well.