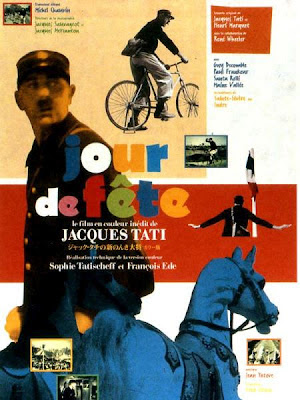 In his first feature film direction itself, viz. Jour de Fete, Jacques Tati displayed, in unequivocal terms, his genius at crafting marvelous humour and wit, with understated layers of pathos and social commentary, out of the simplest and most mundane activities and stories. This charming and delectable film also provided the template – both in terms of content and aesthetics – for the Monsieur Hulot films with which he took comedy and satire in cinema to stratospheric heights. As in the Hulot films, Tati played the role of the principal protagonist as well – a bumbling, good-natured postman in a small French town. The movie begins with vignettes of the unhurried lives of the ordinary folks the town is filled with, seen through the eyes of an observant wise old lady. The arrival of a travelling fair, however, turns the life of the simple-minded postman upside down, when he sees newsreel footage on the American postal system. Forever used to the leisurely style of the olden days, he suddenly feels an incredible urge of incorporating the buzzwords of speed and efficiency, and thus begins a hilarious account of his attempts at reinventing himself. Essentially plotless in nature, Tati filled the film with brilliant physical humour, wonderfully aided by the innovative score, and subtle observations to accentuate his pet theme of the clash between modernity and tradition (no points for guessing where his allegiance lay). Interestingly, Tati had shot the film simultaneously in B/W and an experimental colour scheme called Thomson Color, but it took nearly 5 decades for the latter version to see daylight!

Yes it indeed an absolutely charming film, and it did indeed establish the template for for the great Tati masterworks that were to follow. The qualities that this comedic genius was to be defined by were instituted in this exceptional first film.

This was a terrific debut indeed for Tati, and great to know that you agree that most of the stylistic, thematic and aesthetic tropes that would define his Hulot masterworks found their germination in this lovely film. Thanks Sam.