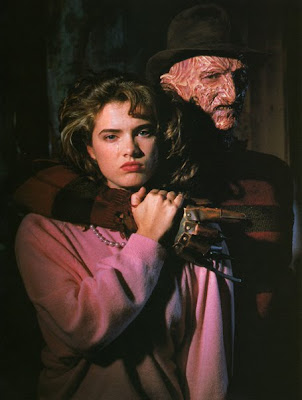 For horror and B-film aficionados, A Nightmare on Elm Street remains a cultural cornerstone, and ranks as an influential and much-imitated film of this genre alongside the likes of Evil Dead and Night of the Living Dead. Fred Krueger, who remains a classic film monster, was first introduced in this low-budget film. The teenagers residing in a small American town seems to be having violent nightmares, and before long they seem to be put to bizarre deaths while they are asleep. Nancy, who too is having those nightmares, finds out that the mystery behind these seemingly inexplicable occurrences lies in an event involving, among others, her mother, that took place years back. Thus, what ensures is a game of cat and mouse between the young girl and the grotesque and disfigured man stalking her in her dreams. The film is not very scary per se, but Wes Craven, who gained both fame and notoriety for directing this cult film, infused enough ingenuity and intelligence in the plot as well as his storytelling to keep the viewers both interested and second-guessing as to what will happen next. It also brought considerable fame to Heather Langenkamp who played the spunky young girl who took on Freddy in her nightmares. Interestingly Johnny Depp made his acting debut in this movie.

I enjoyed Nightmare on Elm Street and it spawned a few very good sequels - the third film is entertaining, and A New Nightmare is excellent.

Thanks Dan. The 3rd film in the series is apparently the best among all the sequels it has spawned.

The pleasure was mine.

Yep, Shubhajit, the film is indeed a "cultural cornerstone," and though it's not really scary, per se, it's an expertly crafted film that has exerted enormous influence in the genre. I'm not really a big fan personally, but I know so many that value it highly. You've sized things up perfectly here!

Thanks a lot Sam for stopping by. Well, this won't rank among my favourite films either. But then, as you too agreed upon, there's no denying its impact especially in the horror genre. And yeah, it continues to have a cult following to this day.

I have always enjoyed Nightmare on Elm Street and Freedy has always been my all time fave character and I loved him since I was about 5 yrs old and now my 3 yr old daughter enjoys watching the collection and isnt afraid of it at all:)