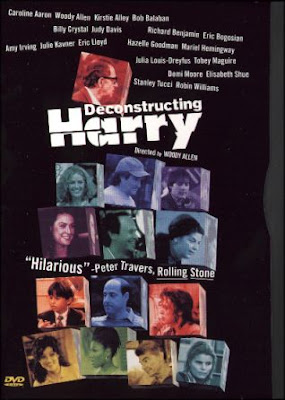 Deconstructing Harry should formally find place among Woody Allen’s best works as also among his most deeply personal. This terrific and acerbic comedy was a biting self-reflection for Allen and an excellent parody on neurosis and narcissism in general. This brilliantly-titled film stars Allen as the eponymous Harry, a lewd, hypochondriac, middle-aged, lonely, philandering, self-obsessed and self-destructive intellectual, who is spectacularly incapable of forming stable relationships, is living a life of emptiness and grotesque excesses, and is suffering from a severe bout of writer’s block. He is to be honoured by his former alma mater – which, ironically, had expelled him when he was a student there – and the film delves on his existential crises leading to and following that event. Many might find the film misanthropic due to its dark theme and pointed jabs at things that most consider sacrosanct; yet, the self-lacerating humour (which, by the way, was incredibly funny at most places), thanks to his fascinating writing skills, is filled with such frankness and vitality as to make one wince, admire and reflect at the same time. The range of oddball characters (including some who are characters from his books!) surrounding Harry’s existence have been portrayed by a stellar cast comprising of Elizabeth Shue, Billy Crystal, Demi Moore, Robin Williams and Toby Maguire, among others.

This one's a lot of fun, especially the scenes in Hell!

I love Woody's 90s trilogy of especially cynical/acerbic comedies, encompassing Celebrity, Deconstructing Harry and Sweet and Lowdown; I don't know why I always link those three together but it just seems to fit.

Thanks Ed. Yeah, despite the cynicism, this one's indeed a lot of fun. And yeah, the Hell scenes are really amusing.

I don't just love Allen's direction & writing, I also like his unique acting style. Really sad that he's drastically reduced his presence in front of the camera in his recent films.

As soon as I just detected this post, I knew that Ed would already be here! Ha! But I don't say this facitiously, but as an acknowledgement for his long-standing appreciation of this sometimes under-appreciated title. Yep, as you note Shubhajit, this is as existential as anything Allan has made (including the Bergman homages) and it's one that has held the stage, which others that followed it have lost some lustre.

Yeah, I too am aware of Ed's love for Woody Allen films. This one indeed is a really good film, albeit (as you mentioned) often overlooked insofar as Woody's filmography goes. Loved the way he portrayed existential crisis & dilemma through acerbic, self-deprecating humour. Thanks a lot Sam for stopping by.

This is one of Allen's most difficult films to like because there is so much material here that is raunchy, but at the same time hilarious and filled with plenty of satire. Good Review!