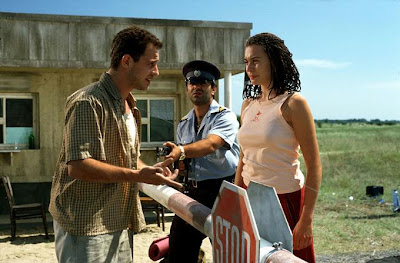 In July is at complete odds with such deadly serious movies like Head-On and The Edge of Heaven that Fatih Akin is renowned for. The only commonality it has with his body of work is where capturing both German and Turkish diaspora and people goes; otherwise, the film seems something of an aberration. A light-hearted, whimsical and charming rom-com and a breezy road movie, it is filled with simple character sketches and idiosyncratic scenarios, is shot in resplendent colours, and is bereft of any socio-political commentary. A shy German teacher (Moritz Blebitreu), convinced that the pretty Turkish girl he has befriended by chance is the girl he’s destined to be with, plunges head long into an adventure road trip that doesn’t just require him to do stuff beyond his wildest imaginations, but also brings him closer to the girl who indirectly kick-started this odyssey of his. And this girl, a good-natured Bohemian lady who’s been holding a candle for him for long, also happens to be, through a stroke of coincidence, his partner in his crazy journey from , across Europe, to , silently wishing he realizes her feelings for him. Look out for an interesting cameo by the director as a corrupt Romanian border police.

This movie really surprised me too, having first seen Head-On! It's really fun though and I love the performances. I like how Akin can work in his interest in German-Turkish relations without coming across as preachy.

And I'm glad you mentioned that cameo- it's a pretty good one.

Nice little capsule. This was the first Akin film I saw and then I didn't seen another until The Edge of Heaven (still haven't seen Head On).

I watched this again recently and found it not quite as tight but still as charming as the first time around. Really promising director.

Yeah, its a fun movie alright. Having watched his Head-On & Edge of Heaven, I really couldn't believe Akin made a rom-com like In July. And yes, in the 3 films of his that I've watched, I've found him anything but preachy. Great that you too loved that cameo :)

Thanks man. I agree, not a tight movie at all, but quite charming nonetheless. By the way, I'd strongly beseech you to watch The Edge of Heaven, its a powerful movie. More importantly, its a movie by a very good director at the height of his prowess.

Ah, I should have been more clear - I did see The Edge of Heaven, just not Head-On.

But I agree with your thoughts on Heaven and have Head-On in my Netflix for later viewing.

You did mention you've seen Edge of Heaven but not Head-On. And for some incomprehensible reason I read that the other way round. My apologies for that embarrassing blunder.