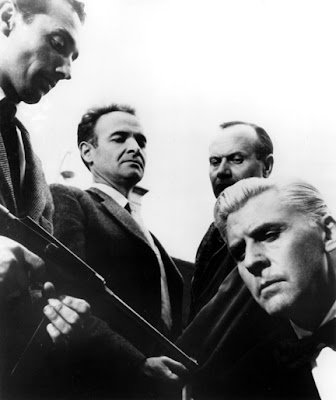 Jean Pierre-Melville’s Bob le Flambeur was both a nostalgic tribute to American film noirs that were nearing the end of their classic era, and an early trendsetter (or pioneer) for the Nouvelle Vague movement that was about to begin. Thus it managed to be the perfect bridge between the doom and fatalism typified by the former, and the kind of style and iconoclasm brought in by the latter. The film has at its centre the eponymous Bob the Gambler (played with imperious panache by Roger Duchesne), a compulsive down-on-his-luck gambler of aristocratic lineage and who lives within a strictly defined moral code, who decides to earn some quick buck by robbing a huge casino. He gets hold of the perfect crew and devises the perfect plan, only to go haywire thanks to human frailties and bad luck. But a sudden resurgence of fortune and some quick banter later, we are provided a delicious and memorable finale in keeping with the kind of charm, style and swagger of our protagonist. The film, shot in glorious black-and-whites, boasts of a very fine cast, especially Isabel Corey who plays a coquettish nymphet whose age (she was barely 16 then!) belied her wholesome body and precocious sexuality. The light-hearted and immensely enjoyable caper was also a celebration of Montmarte and the sinful night life of .

"Thus it managed to be the perfect bridge between the doom and fatalism typified by the former, and the kind of style and iconoclasm brought in by the latter."

Ah, I do agree completely Shubhajit, and the blend does make this film exquisitly entertaining and a viseral delight. It does in fact rank among Melville's best films. It is much like Kubrick's THE KILLING, in that it brings together sympathetic men to pull off a near impossible robbery, and fate plays a critical role here. It would safe to say (especially in view of your specifications) that this is the most "poetic" of all caper films.

Our assessments and ratings are pretty much the same here... I don't rank it quite as high as Melville's very best, but it is an entertaining and poetic film. It is not nearly as intense as are other Melville films, and perhaps that is why I don't respond to it as well as favorites like Le Samourai or Army of Shadows. But a second-tier Melville is light years ahead of top flight work from other directors, so this remains an essential film of French cinema.

Thanks a lot Sam. The heist film genre has seen some of the greatest noirs ever. Movie like Asphalt Jungle, Killing (as you noted), Killers & Criss Cross immediately come to mind. But Bob le Flambeur is much lighter work - as you aptly said, a "poetic" caper film indeed.

Well, for me this would rank higher than Le Samourai. Haven't watched Army of Shadows yet, so can't comment. As you observed, this is a quintessential French film in terms of the amount of style & charm it has brought in, making it, again as your observed, more entertaining and poetic, and less intense. Thanks Dave for sharing your views.