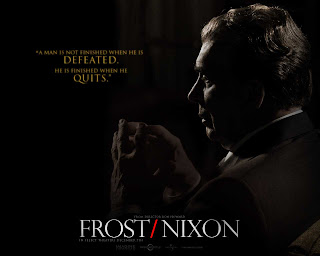 Frost/Nixon could easily be the most distinctive movie that Ron Howard has made in his career thus far. It is far removed from his earlier movies like A Beautiful Mind and Apollo 13, or perhaps not. A movie based on ‘actual events’ can be tricky. Thankfully, this fictionalized retelling of the electrifying 1977 interview of deposed American President Richard Nixon by British television guy David Frost, has managed to rise above the clichés and constraints that docu-fictions are more often than not seem to be governed by. The best aspect of this movie, like Queen (which, too, had Michael Sheen playing a ‘real’ character – Tony Blair there, as compared to Frost here), is that the director didn’t place history lessons over delving deep into the minds of the protagonists. And interestingly, on either occasion, the respective directors chose to have the more dramatic historical events as backdrops – the infamous Watergate Scandal and the tragic death of Princess Diana, respectively – masterstrokes, one might even say. A verbose and intense movie like this relies heavily on the actors, and the impressive cast, led by a towering, nuanced and a thoroughly brilliant turn by Frank Langella, certainly made the director’s job a lot easier than one might have imagined.

The performances in this film were stunning! Michael Sheen's portrayal of David Frost gave me goosebumps..he was perfect! And so was Frank Langella (I don't know why but I liked Sheen better than Langella). Overall, Frost/Nixon was awesome. Loved it! I was expecting a higher rating from you! :D

Pretty decent flick I thought, turned too Hollywoodish towards the end...

@Bhargav: Sheen was good, but Frost's character wasn't as psychologically complex as Nixon's. And the best thing about Langella was that he enacted but never blindly imitated the real Nixon. To me 4 is a fair rating for the movie.

@Seventh Art: Are you referring to the late night phone call scene?

@Seventh Art: i concur,
by the way people, spare a thought for the greatest auteur who ever lived, he graced the earth today!

@Seventh Art: i concur,
by the way people, spare a thought for the greatest auteur who ever lived, he graced the earth today!

@Adrenaline: I didn't realize today is Satyajit Ray's birthday. I just finished watching a movie of his. Coincidence?

@Shubhajit: Yes, that too... There always was a sense of the underdog victory in the film. But where Howard gets it all wrong is the fact that It wasn't Frost who nailed him it was his TV crew...

Even I got a chance to see Pather Panchali for the first time last week...

@Seventh Art - I saw that you've written a huge article on Pather Panchali. Will have a go at it asap.