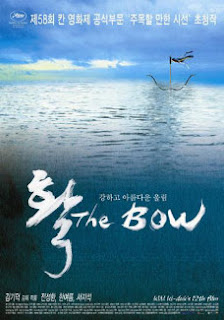 Kim Ki-Duk has explored a tale of forbidden love in the serene but quietly disturbing movie The Bow. Veering decidedly towards abstract imageries and performances, it chronicles the peaceful existence of a laconic older man and an ever-smiling young girl who he has brought up in his boat and plans to marry as soon as she turns seventeen. However with the Korean director’s movies one knows peace is nothing more than superficial – first we have lecherous men making obscene passes at and attempts on the girl, and soon enough we see a sensitive teenager falling in love with her, which drastically complicates the secluded love affair of the unlikely couple. The bow, which the old man uses as a dangerous weapon, a fortune-telling tool, as well as a musical instrument, easily manages to delineate the basic motif of the plot. The movie is heavily reminiscent of Duk’s 3-Iron in particular in that dialogues play a minimal role here (a common string for all his movies I’ve watched) and the two principal protagonists’ voices are never heard as they hardly ever speak, and when they do, they do so in whispers. Surrealistic in feel, layered in content and making fine use of symbolisms, this movie is bound to keep the viewers spellbound, even if at the end they would be left uncomfortable and with a heavy heart.

As I think you know, I did not like this Kim film. Strangely, I thought it almost redeemed itself with the ending, as it was.

I saw His new one, Dream, last night. It was interesting but ultimately I'm indifferent to it. It didn't get my britches all in an uproar like this or SSFW...S did.

Yes, I agree, the movie did in a way redeem itself with the ending. However there still was a surprise factor in that, and it really can't be called a happy ending.

Yeah, its hatred is better than indifference :)

Not to beat a dead horse, but hatred is worse than indifference for me. There were times during this film and SSFW...S that I wanted to turn them off and give up, I found them that unpleasant (or banal). ;)

"Dream" held my interest, I enjoyed the characters, and I wanted to see where they would go. In the end it didn't take me anywhere too special but I didn't get mad at it, or regret watching it. Even when Kim made fuzzy use of fuzzy dream logic or filmicatical pain for mere button pushing, I hung around. It was OK.

This film isn't the most immediately likable one that we've taken a fondness to. If you're not the kind of person who is socially introverted or know of people like that, it is hard to immerse yourself into Kim's world.

Most of his characters live like ghosts in a world that does not need their existence. They are not the type who own Facebook accounts. WE don't have Facebook accounts and maybe in some weird way that and our many other antisocial behavioral patterns made us understand this extreme alienation.

I agree with that. All the Kim movies that I've watched so far had a loner as a protagonist - doesn't matter if its by choice, by coercion, or by coincidence. Even the the two principal characters of Bow, despite sharing the near tranquil relationship for most part of the movie, are in essence fiercely lonely. Most might find this cynical or nihilistic, but I feel human loneliness is a universal theme.