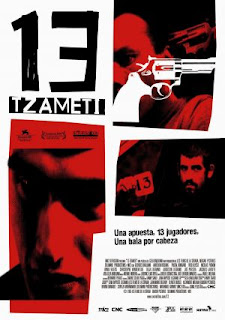 Shot in grainy black and white, made with a tight leash on the economic aspects, and eerily minimalist in composition, French filmmaker Gela Babluani’s debut feature 13 Tzameti is a sparse yet effective thriller. It is an austere tale of psychological terror, at the heart of which lies a subtle and intelligent variation of Russian roulette, where the players and members of an underground society participate in a deadly game of highest possible stakes. The director’s younger brother, in his (you guessed it) debut acting performance, has done a fine job in the role of the protagonist who realizes in the worst possible manner, as a critic so aptly put it, that “there’s no such thing as free lunch.” This low budget arthouse movie with a deceptively calm and mundane opening, allows a steady buildup of tension. Though neither greatly nerve-wracking nor filled with any remarkable character study, this ingenious low-budget movie nonetheless points towards a promising career for the director.

it is indeed fine movie with thrilling end.French film makers are good in thrillers as comparison to their counterparts Hollywood.

Yeah, this is indeed an interesting thriller.

The french are existential nihilists. Not that there's anything wrong with that. I'm one too!

This wasn't really a thriller. It was just a big dare. Tense, but not real engaging.

I don't really know whether French people, can in general be considered such. But, as you said, there's nothing wrong in that, and could easily count me too as a member of that gang.

Yeah, the movie was interesting without being riveting.