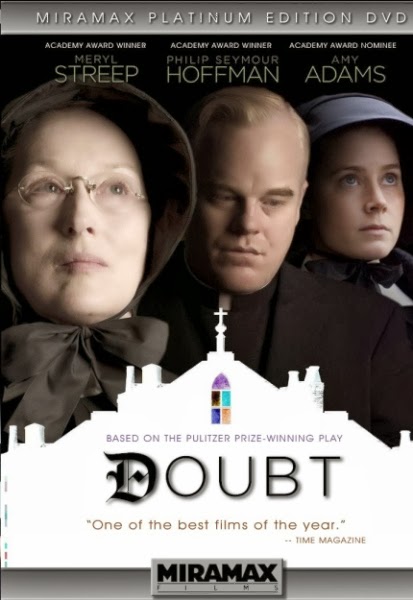 Doubt, adapted by the director from his own Pulitzer Prize winning play, addressed the issue that has been plaguing the Catholic church more than anything else, viz. the rampant allegations of child abuse by its priests. However, instead of tackling a situation that is in black and white, it focused instead on, as it generally happens, a matter in gray and shrouded in smoke, and the ensuing question of how suspicion can be a stronger force than certitude. However, more than anything else, this was a master-class in acting with 4 powerhouse performances to boot. Father Flynn (Phillip Seymour Hoffman), the charismatic priest at a Bronx church, is popular on account of his jovial nature, friendly disposition towards kids and liberal mindset. Sister Aloysius (Meryl Streep), the stern, orthodox-minded and disciplinarian principal of the adjoining school, however, has unfounded suspicions surrounding Flynn, and when Sister James (Amy Adams), a naïve young teacher in the school reports a seemingly odd encounter between the Father and the school’s sole black student who’s finding it tough to get adjusted, Aloysius becomes convinced of Flynn’s guilt and pedophilia. The fact that his nature and religious philosophies are in direct contrast to hers, provided the fuel to her steadfast crusade to get him removed from the place, with the emotionally fragile James torn apart in the complex turbulence that ensues on account of the war of wills. Even if the proceedings seemed tad theatrical at some points, one can’t help but be emotionally invested in this grim and slow-burning but gripping drama. Both Hoffman and Streep gave tour de force turns, while Adams, too, was good; Viola Davis, as the young guy’s working-class mom, shone in her brief role.

This is a film that is often overlooked, but for my money it's a great example of how the "play as a film" approach can work.

Yeah, a fine film & masterclass in terms of performances. Apt point you've made about its approach, as, in essence, it indeed is so. Thanks Bill for stopping by.

Amy Adams has got some nerve, shes pushing 40 but expects everyone to believe shes still only 26, the cheeky bitch.

Powerful drama that has held up quite well on reviewing. A spate of excellent performances, and after Hoffmann's untimely passing it will always be associated with his work here. This coming weekend at the Jersey City Loews the film is showing tomorrow night in honor of Hoffmann.

Thanks Sam. Yeah, the film comprised of 4 very good performances, including a top-notch one by Meryl Streep. The fact that Hoffman managed to stand out from the crowd despite that proves his incredible mettle as an actor, and confirms what a tragic loss his unfortunate demise has been to the world of cinema. I'm sure you're planning to attend the screenings planned to honor him.