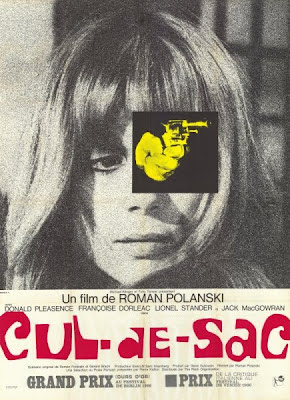 Soon after directing Knife in the Water, the filmmaker Roman Polanski shifted base to England where he made three movies, the first of which was Repulsion, a cornerstone in psychological horror. He followed that up with Cul-de-Sac, a brilliant black comedy concerning a bizarre manage-a-trois between David (Donald Pleasence) an effeminate and cuckolded middle-aged man, Tess (Francoise Dorleac), his svelte, sultry, aggressive and much younger wife, and Dickie (Lionel Stander), a brutish thug on the run. Owing to a botched job that has left his Chaplinesque partner Albie (Jack MacGowan) shot in the gut and the two stranded in the middle of nowhere, the menacing Dickie takes refuge in an idyllic mansion overlooking the sea by holding its occupants, the above mentioned couple, as hostages. Exquisitely shot in crisp black-and-whites and filled with a host of disconcerting extreme close-ups and convoluted camera angles, the film is filled with the kind of dark nihilism and twisted portrayal of human behavior that the maverick Polish auteur was both renowned and notorious for. None of the characters in the movie are what one might consider as “normal people”; rather, their demeanours are cartoonish and oftentimes bordering on the excesses, thus making their characterizations unique and hilarious. Comprising of a taut script, an excellent score, and superb performances, the movie’s tar black humour, grim worldview, latent violence, and edginess, are recipe for a relentlessly bleak and disturbing yet incredibly gratifying cinematic experience.

Great review,Shubhajit.I did not get it at all during the first viewing,I thought the plot is too loose,and the husband role is unbearable.After that,I've read many reviews(including yours),they made me rethink of the film,I might give it a second view sometime.

Thanks a lot David. Yes, do give the film a second viewing - its worth it.

Yes, the hip jazzy score by Krzysztof Komeda (whose finest score for Polanski was to come in 1968, a year before his tragic early death a year later) is quite unforgettable, much as his early music was for KNIFE IN THE WATER, but as you note CUL-DE-SAC is suffused with black humor and a grim worldview, and it's a disturbing film, much as the later THE TENANT is. But it's absolutely a cinematic treat. Terrific review as always!

Thanks a lot Sam. Yeah, the music in Knife in the Water too was quite good. Polanski had hit a truly incredible purple patch in the first third of his career as this was followed by a string of fascinating films. Some say the grim worldview and misanthropy evident in his films were carried by him into his life as well. Despite the despicable act that he committed that turned him into a fugitive for the rest of his life, its difficult not to be an admirer of the Polish genius.