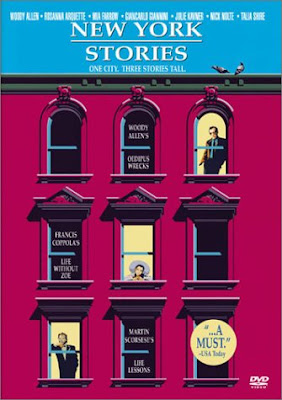 New York Stories, an omnibus comprising of three short films based on New York and New Yorkers, bears the astounding distinction of serving as the confluence of three of the greatest American filmmakers – Martin Scorsese, Francis Ford Coppola and Woody Allen. Scorsese’s Life Lessons is about an ageing, moody and brilliant painter (a compelling Nick Nolte) in self-destructive love with a bitchy and much younger girl; Coppola’s Life Without Zoe deals with a few days in the life of Zoe, a lonely 12-year girl and daughter of a renowned, globe-trotting flautist; Allen’s Oedipus Wrecks concerns a successful Jewish lawyer (played by Allen himself) whose life and relationship (with Mia Farrow) are on the docks courtesy his domineering mother. Scorsese and Allen have, over their careers, created masterpieces with Big Apple as the backdrop, and their shorts, though never equaling their best works, are certainly worth a watch – Scorsese’s edgy and melancholic, while Allen’s darkly funny and self-deprecating. The one by Coppola, however, tuned out to be rambling, a tad pretentious, and thus ultimately disappointing – saved only by the fact that his fantastical short was sandwiched between two reasonably assured works. The three shorts do not have any connecting thread apart from their locale, thus making the whole seem disjointed; nonetheless, any project that brings such powerhouse filmmakers on the same platform automatically becomes a must-watch for any cinephile worth his salt.

These type of films in my experience are kind of hit and miss. For example I loved lots of Paris Je' T'aime, hated most of "New york I love you". Often times I like some of the segments, other parts not.

New York stories is actually on my "to-see-list", so I'll get back to you with my opinion when I've watched!

I agree completely with you on that omnibus films tend to be topsy-turvy rides. Even in Paris Je T'Aime, which you mentioned, some of the shorts were really good, while there were also some that could have been done away with.

Yeah, do give this one a try and let me know how you found it.

Agree totally with you on this. Coppola's segment wnet nowhere. If I have to put them in order of my own personal preference it would be Scorsese's film, then Woody's with Coppola bringing up the rear. Nicely done.

Scorsese's segment was the best of the three, and Coppola's the worst. I completely agree with John here. It seemed like a given that at some point these three would join forces, and considering the material you'd think the odds would be on Allen coming up tops. His own piece is fair enough as you well establish here in another great capsule treatment.

@John: Yeah, it was really disappointing. Couldn't really make out what Coppola wanted to portrait or say. Thanks John.

@Sam: Thanks Sam for the good words. Well, I found Woody's short equally good vis-a-vis Scorsese's, though in spirit, content & execution there were poles apart. I really liked the performance of the lady who played Woody's nagging mother :) Nick Nolte, too, was really good.

your right @shubhajit. its also reminds me about my grandfather.. during their time. this Website design New York

I've seen "New York Stories" now, and thought the first part with Nick Nolte was by far the most gripping and memorable, about the artist life, even though I don't really like Nolte normally.