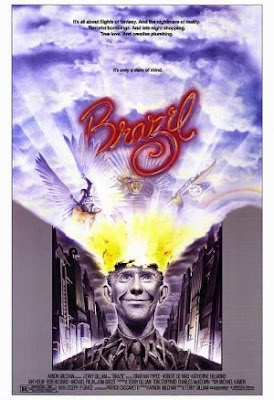 To simply qualify Brazil as inspired from George Orwell’s 1984 would be telling only one half of the story. The Byzantine plot is based in an Orwellian and dystopian future where the world has been converted into a cold, disconsolate, concrete jungle, populated by dysfunctional human beings, controlled by a Fascist regime and tyrannical bureaucracy, and operated by endless automisation. And, to escape the bleakness of the decaying world around him, Sam Lowry, a civil servant, takes refuge in his elaborate dreams where he is a winged superhero single-handedly fighting grotesque villains in order to rescue his lady love. Terry Gilliam, who directed this enormously ambitious science fiction film, filled every nook and corner of the story with pungent observations and jet-black satire of a technology-obsessed world filled with narcissistic, cartoonish characters, and quick to label revolutionaries and renegades (people who possess the courage to choose freedom over oppression) as pariahs and dangerous terrorists. The film, filled with special effects, production designs and breathtaking imagination that would be groundbreaking even today, has as its motif the melodious 1930’s song from which the title and the theme have been borrowed. Jonathan Pryce gave a superb performance as the meek, docile and escapist loner, and has been immensely aided by a host of terrific performances, including a quirky cameo by Robert De Niro.

This is my second favorite movie (I think), and you've wonderfully summed up its magnificent qualities! I think Jonathan Pryce is so strong here, and it's too bad he's more often given supporting roles in other movies. I'm glad Gilliam uses him so often, of course!

"The Byzantine plot is based in an Orwellian and dystopian future where the world has been converted into a cold, disconsolate, concrete jungle, populated by dysfunctional human beings, controlled by a Fascist regime and tyrannical bureaucracy, and operated by endless automisation..."

Brilliant review, and economically cogent almost to a fault. I like this film more now than I did upon its release, though I still rate a few other Gilliams a bit higher. But this is the one that hit a home run for most fans of his work, and your gloriously dense rhetoric frames it perfectly.

Thanks a lot Alex. Yeah, Jonathan Pyrce, like so many other actors, fail to get leading roles despite great acting abilities. By the way, since you're saying this is your second favourite film, I'd be really interested to know which movie tops your list.

Thanks a lot Sam for the kind words. Yes indeed, Brazil did hit a home run for most Gilliam fans, though I'm embarrassed to admit that I haven't really seen much of Gilliam's films. I guess I'll need to correct that blemish, as I need to correct many others.

By the way, you say Brazil didn't work for you during your first viewing. Do tell me what your perception of the film was upon its release, & how it got modified upon subsequent viewings.

One of my all-time faves, can't believe I've only seen it once. If this doesn't make you fall in love with Gilliam, you're fucking hopeless. Solid review, continually makes my day when I see how much people like this masterpiece.

Thanks Aiden. Yeah, a great film this certainly is, though I'm not sure if it would appeal to everyone. But then, when did real good movies start affecting those fed on popcorn blockbusters anyway :)