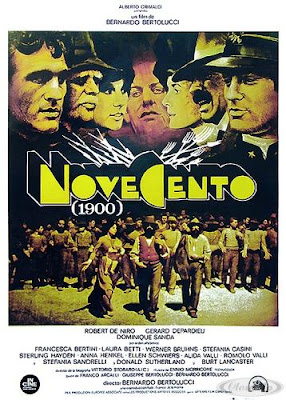 Whoever thought Bertolucci’s films couldn’t get any more controversial and scandalous post-Last Tango in Paris, were given sharp taps on their knuckles in his very next film, viz. 1900. A master class to some and a disappointing mixed bag to others, this gargantuan epic (the film’s original cut, which I was fortunate to have watched, runs over 5 hours) divided the critics right down the middle. This cinematic equivalent of bidungsroman has at its forefront two protagonists – the amorous Alfredo, a wealthy landlord’s son, and communist-minded Olmo, born to a family of poor farmers, conceived on the same day at the turn of the 20th century. Though friends as kids, the two go on to share a complicated relationship as they take divergent routes as adults; and through them the director has presented a captivating picture of Italy’s chequered and volatile history over the nest half a century or so. Breathtakingly photographed and accompanied by Ennio Moricone’s glorious soundtrack, the film has its fair share of spectacular highs and avoidable lows – a film of this staggering length always runs the risk of turning out disjointed, yet it also had the luxury of having a leisurely paced narrative suiting the film’s epic scope. It boasts of an all-star cast, with Robert De Niro and Gerard Depardieu giving fine turns as the two protagonists. The best piece of acting, however, came courtesy the thunderous performances from two seasoned American warhorses – Burt Lancaster and Sterling Hayden. Donald Sunderland, too, was good in his disturbing, if not entirely believable, character.

Sutherland's performance and the film's ending limit the extent to which we can take 1900 seriously, but I appreciated the film's sweeping scope and Bertolucci's sympathetic but not uncritical attitude toward the Left. It's an essential Seventies film.

Yeah, absolutely agreed. Bertolucci might have been a bit too indulgent at times, but that I guess was bound to happen given the movie's scope and the fact that it was very close to his heart. Certainly an essential watch for any cinephile. Thanks for dropping by.

"Breathtakingly photographed and accompanied by Ennio Moricone’s glorious soundtrack, the film has its fair share of spectacular highs and avoidable lows – a film of this staggering length always runs the risk of turning out disjointed, yet it also had the luxury of having a leisurely paced narrative suiting the film’s epic scope."

Count me in as one of the film's admirers, and yes, Lancaster and Hayden are absolutely the dominant actors in this ravishing tapestry (gargantuan indeed) that stands as one of Bertolucci's greatest works. Superlative capsule here!

Thanks a lot Sam for the appreciation and for sharing your love for this epic movie. Interestingly, despite the movie's scope, and consequently the scope for the lead actors, I wouldn't rank this along with De Niro's top 5 performances, i.e. in Taxi Driver, Mean Streets, Godfather II, Raging Bull & Casino