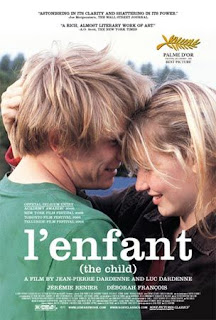 Their first directorial effort since the much acclaimed The Son, Belgian brothers Jean-Pierre & Luc Dardenne’s L’Enfant is a more emotionally charged and less morally ambiguous, albeit as psychologically complex tale when compared to the former. Filmed with the kind of stark and grim realism that has become a hallmark for the Dardenne brothers, the movie comprises of a strong social commentary in the story of Bruno, a young small-time hustler who realizes the kind of reverberations that an act of utter ethical and moral callousness – th of selling his new-born baby in the gray market, can cause. His comeuppance becomes really profound not just because Sonia, his girlfriend and the baby’s mother, is expectedly mad at him, but because, perhaps for the first time in his life, he is having to face the immaturity and irresponsibility that have come to define his very existence. Thus, by the time of its powerful final scene, Bruno has become a more rounded person from being just another surface-deep crook. The acting of the two principal leads has helped in exploring the moral chaos that typifies life in a colourless urban jungle. As with The Son, the movie has been filmed in an unspectacular cinema verité style and is devoid of any background score – as if the Dardenne’s camera is just a silent bystander observring life.

Your successful navigation of 'word economy' is again evident in this dead-on appraisal of this important film by the Dardennes, which I fully agree is "more emotionally charged and less morally ambiguous, albeit as psychologically complex as the former." Of course, the 'stark and grim realism' you assert here is dead-on as is the trenchant social commentary. And yes, cinema verite is the Dardennes mode of expression, and backround music is non-existent.
Bruno is an emotionally distancing character, but that's really the whole point. In the end this is a poerful film, one of the brothers' best.

Thanks a lot Sam for your wonderful summation of the Dadenne brothers' most highly rated work.

This is only the second film of the Dardennes that I've seen, and yet its easy to appreciate the kind of respect they command in the world of cinema. Their uncompromising filmmaking is something to really behold. Hopefully the next film by the brothers that I might watch next is Lorna's Silence, which too has received rave reviews from critics, though not as much as the 2 that I've watched.

This is my favorite Dardenne brother's film though ROSSETTA, THE PROMISE, THE SON, and LORNA'S SILENCE are all very good.

Actually, LORNA made my Top Ten list of '09. I own the UK DVD import but I believe it was just released in the US.

Well, it is my favourite Dardenne film too. But here it must be mentioned that, unlike you, I've so far watched just 2 of their movies.