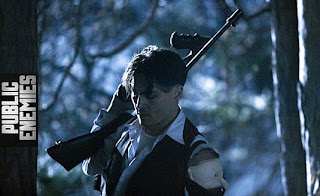 Michael Mann’s latest offering Public Enemies starts off brilliantly with a messy escape scene that is at once gripping and real. And it serves as a useful indication of things to come, even though the wonderful opening gambit is rarely ever equaled again. Like most movies by Mann, this is a mainstream movie, capable of entertaining, but also not without elements separating it from the slew of “shoot-‘em-kill-‘em” stuff made in the gangster genre – the documentary/TV footage-like photography in a number of scenes, the generous length, elaborate and deliberately bloody gun-fight sequences, and a deceptively unspectacular climax. Johny Depp, as “public enemy no. 1” John Dillinger, whose audacious bank robberies and slippery nature tuned him into a celebrity and an icon, more so when the FBI decided to bring him down, is impressive as the dandy gangster in a dapper suit. Well, to be honest, this isn’t a great movie for those looking for thunderous individual performances, or for that matter those looking for moral/philosophical overtures. Rather, in most parts it is a fine movie given its mainstream ambitions, yet with enough signatures to ensure that the director’s touch never gets lost in the ensuing blaze of gun fires.

I really want to watch Public Enemies. Johnny Depp surprises me with every film! Have you seen the trailer for Alice In Wonderland?

Here's the trailer if you haven't already watched:
http://www.bhargavsaikia.com/2009/08/dil-bole-hadippa-full-title-song-alice.html

A good review of a film that is just average for me. I like Michale Mann and love well-made gangster films, but this one didn't approach the best of either. I wanted to love this film so badly, but just couldn't. It was bad, it wasn't great... it was just OK.

Ditto, I felt Mann missed an opportunity to nail it. He could have done more. And Bale could have been replaced by Andy Garcia or Brad Pitt or even George Clooney (although I'm not sure how different each would have interpreted Pervis. This selection is based on my view of Pervis' character).

@Bhargav: Yeah, have a go at it. Even if you don't fall in love with it, you won't have a bad time either. And thanks for the link, will watch it asap.

@Dave: Agreed, especially given that the hot seat was chaired by Michael Mann. However, having said that, my opinion about the movie is perhaps slightly more positive than yours. Thanks for the appreciation.

@Srikanth: Yeah, I know, I too was looking for that something extra, though I had a reasonably decent viewing experience at the theatre. As for Bale, I too think he probably let that character down. I guess he hasn't yet gotten over the Batman hangover - case in point, that hoarse voice.