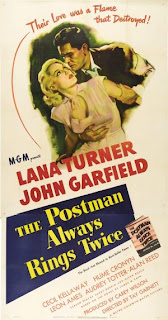 Adapted from pulp fiction novelist James M. Cain’s most popular work, The Postman Always Rings Twice is a classical film noir movie. The idea of a weak man who is casually seduced by a sultry blond femme fatale (in the garb of a damsel in distress) to murder her husband has been well presented through deft psychological foreplay, an incessant shadow of the impending doom, moody atmosphere and a clinically edited voiceover. John Garfield, a drifter with the “road fever” makes a fatal choice of location by stopping for employment at a rural diner. He ends up having a torrid illicit affair with the owner’s wife, played famously by Lana Turner. What follows is a tale of lust, deceit, and cold blooded murder. The title, though apparently a non-sequitur, is explained at the climax – that crime never goes unpunished and sooner or later fate has a strange habit of catching up. Though lacking on the cynical dialogue or novel plot development fronts, heavily toned down in order to be acceptable to the then censor board, and very melodramatic and verbose at times, the movie nonetheless more than made up for them through fine acting, tense atmosphere, raw chemistry between the leads and the bleak irony of its climax. Though later remade starring Jack Nicholson and Jessica Lange and without any boundaries imposed through pseudo-moralities of the censor board, this 1946 black-and-white version still remains the best adaptation of the Cain masterpiece. And along with Double Indemnity it remains one of the best adaptations of Cain novels for the silver screen.